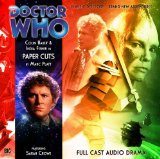 Starring Colin Baker as the Sixth Doctor and India Fisher as Charley, Paper Cuts follows straight on from Patient Zero’s cliffhanger. Like the TV story Timelash, this sees the Sixth Doctor returning to the scene of a Third Doctor adventure. With fortuitous timing it’s Frontier in Space (recently out on DVD), so we meet once again the reptilian Draconians, Jon Pertwee’s favourite aliens.

Fifty or sixty years ago, in the 68th year of the Serpent, the Red Emperor of Draconia isolated the planet to keep out a plague, ending a thousand-year empire. Now, in the 80th year of the Blood, four men, “the highest, the lowest, the bravest and the wisest”, are summoned to serve as vigilants in his tomb: a prince, a fisher-catcher, the disgraced captain of the Imperial Guard and the Doctor. One will become the new Emperor, but what terrible secret awaits him?

The script is by Marc Platt, writer of Ghost Light, the last story of the original series to be produced, and it shares with that story a most welcome ambition in its writing, with lines like: “There’s something out there… Can you feel it? Filling in the dead spaces, gnawing at the ropes of time.” It’s full of interesting ideas like origami warriors with paper swords, young Draconians wearing necklaces of their own eggshells, and the extent to which time travellers can get away with letting their email build up. As the Doctor says, “Lateness, like all time, is relative.”

Though setting a second story in a row in an isolated location makes for a little repetition, the “cold empty rooms with paper thin walls” make for a novel setting, and paper is a material that lends itself very well to audio drama. Overall, an exciting and innovative adventure.