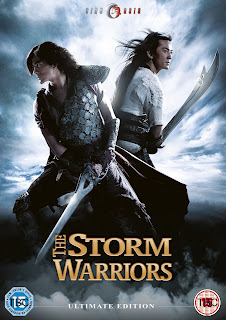 Through poisonous treachery Lord Godless has captured the Emperor of China. Unable to defeat the invincible atheist, the great generals of China incinerated, Wind and Cloud retreat to gather their strength. Wind walks Lord Wicked's path of evil, the dangers of which are shown by Wicked's decision to cut off his own arms, to limit his own evil-doing. Cloud takes on the powers of master Nameless, creating twenty-three new sword styles of "divine superiority" along the way, collectively known as "Ba!" Time for a rematch!

The special effects in this film are often fantastic: it's a video game come to life. Aaron Kwok and Ekin Cheng return to the roles they originated in Andy Lau's 1998 film The Storm Riders (which I found a little underwhelming), and Wind and Cloud look like they've stepped out of a Squaresoft cut-scene. As in The Eye trilogy, and even their otherwise slightly disappointing American film The Messengers, the Pang Brothers make brilliant and often subtle use of digital effects. Much like 300, 95% of the film is computer generated, estimates Oxide Pang in the special features.

It's not a perfect film: its adoration of 300 is not restricted to technical issues, certain shots and costumes feeling more like cheap imitations than homages. The female characters have little to do but look serious and pretty (and in many cases die) and the two heroes are a bit soppy and stiff. But in a film where the main draw is the fighting those flaws can be overlooked.

At worst reminiscent of clunky, melodramatic but fun Indian telefantasy, at best quite fantastic, this is one of the better movies of its type I've seen since Zu Warriors of the Mystic Mountain. If it had featured a character with extensible eyebrows, or even a scene where the heroes took on a decently-sized army or two, it might have beaten even Zu. I didn't always understand what was going on, but when it happened I was enthralled.

The DVD includes a commentary by Bey Logan and 80 minutes of interviews and special features.