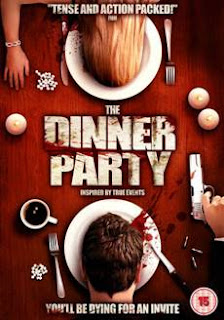 This semi-sequel to real-life events begins with a group of Australian students being cautioned and interviewed about the evening of 12 September 2007, when Angela King, a beautiful, insane drama addict (played by Heartbreak High vet Lara Cox), threw a farewell dinner party. A farewell to life, that is: she and boyfriend Joel planned to kill themselves after dessert. Anything to avoid charades! Their insufferable student friends came to spectate and cheer them on. But Joel knew nothing about the suicide plan, and no one thought to tell him.

This is a decent stab at making a high concept film on a very low budget, but it wasn't terribly exciting to watch. Fifty minutes of story are padded out with lots of moody montages, while police interviews and flashbacks to Joel and Angela's first meeting add little to the film. Issues of complicity and moral courage are raised in a perfunctory way, and there's a curious lack of weight to it all. Knowing from the beginning that most of them survive kills much of the tension. The only question left is whether things will play out as you are led to believe, or if there will be a twist. But I wasn't made to care – the speculation felt academic.

By far my favourite part of this film was the appearance of the paramedics at the end: they felt crushingly real, people getting on with their jobs, following well-worn routines in the most ghastly of circumstances. Perhaps that's because they were real: the emergency services are thanked in the credits. Credit also to the music, by Fire on the Hill and The Andi & George Band, a melancholy atonal noise with swings towards Tangerine Dream cosmic rock.