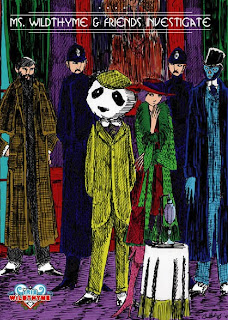 Iris Wildthyme is a brassy time-traveller and adventurer – a cross between Mrs Cornelius and Una Persson – who originated in the novels of Paul Magrs before achieving a certain notoriety in his Doctor Who books. This book of four novellas is largely devoted to her friends.

"The Found World", by Jim Smith, featured Professor Challenger, Dracula, Sherlock Holmes, Doctor Watson, submarines and secret Scottish bases, and while it was good and pushed each and every one of my buttons, I fear I'm in danger of exploding if I read another Victorian crossover too soon.

In Nick Wallace's "The Irredeemable Love" the time-lost inhabitants of the Manleigh Holt Police Station investigate a terrible house in the woods. This relatively serious and surprisingly frightening story, told from a series of overlapping viewpoints, was for me the highlight of the book.

"Elementary, My Dear Sheila" by Cody Schell couldn't have been more different. This tale of a Mexican wrestler, Senor 105, and his friends – including Sheila, a balloon with a Parisian accent – convening for a book club was surreal and deliberately silly. Welcome qualities in any story! But this one would perhaps have been more enjoyable had the characters treated the silliness with a little more seriousness.

The punctuation goes a bit haywire in "The Shape of Things" by Stuart Douglas, but the story's good fun, plucking a MacGuffin from the previous story and running with it through time. Iris, her panda and her bus take centre stage and of all the stories this felt most reminiscent of Iris's earlier adventures.

Unfortunately the book is poorly proofed, and if you haven't read previous volumes it may seem rather randomly assembled, but there is plenty to enjoy regardless: it's entertaining, good-natured and undemanding; a good collection of very varied novellas.