What Will Come After, Scott Edelman 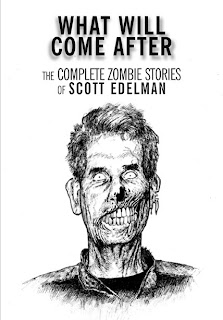 What Will Come After is a collection of very literary zombie stories – and one excellent play – from Scott Edelman. The stories aren't interconnected, but they are more or less consistent in their approach to zombification. It isn't a plague passed on by bites – in most of the stories everyone who has recently died returns to life; undeath, rather than death, becomes the complementary state to life. (Understanding this helps to make sense of the first story, in which otherwise it's not clear how the narrator knows he is about to change.) Each zombie is extremely strong, able to rip humans and animals apart, and in most of the stories they display a shark-life sense for discovering their prey. In most the world goes on living, more or less, people coping (or not) with this new disaster just as they coped (or didn't) with all the others.

The collection begins with "What Will Come After", a stunning, poetic tale told in the future tense, where a writer describes what will happen after he turns. In "Live People Don't Understand" a young wife wakes to find herself beneath the ground, and decides upon revenge. "The Man He Had Been Before" concerns domestic violence. People find it hard enough to leave abusive partners in our world; how much harder to do it after the apocalypse? "Almost the Last Story by Almost the Last Man" finds a writer holed up in a library, in which he writes story after story, trying to find some kind of sense to it all. In a way it's the most traditional zombie story in the collection, with a protagonist ensconced in an impromptu fortress, having to make decisions about when and how to venture outside, but it's also the most expansive and playful of the stories.

"Live People Don't Understand" is built upon the plot and characters of "Our Town", a play by Thornton Wilder, and two of the very best pieces here also play with earlier texts. "Tell Me Like You Done Before" is a superb sequel to Of Mice and Men, which sees poor George pursued by undead mice and men across the dustbowls. Recommended to anyone who thought Steinbeck's ending too cheery. "A Plague on Both Your Houses" is a play in five short acts, a Romeo and Juliet of the living and the undead which I would love to see performed. (My own impromptu performance went down badly with the family.) Recommended to anyone who thought Shakespeare's ending too sad.

The remaining stories suffer only in comparison to the high standards of this collection; in most other books they would have been outstanding. In "Goobers" a projectionist working in a cinema showing nothing but zombie films finds an unusually appreciative audience, but the abrupt ending didn't satisfy. "The Human Race" concerns a woman who lost her family in the London 7/7 bombings, and learns to live again when surrounded by the dead. "The Last Supper" is eaten by the zombie who hunts down the last living human, in a story that reflects, I think, our own overwhelming greed with regard to the resources of our planet.

Stories like "Tell Me Like You Done Before" and John Kessel's "Pride and Prometheus" demonstrate that what's come to be known dismissively as the mash-up isn't the sole domain of quick cash-in artists; in the right hands it can produce works of art that have value beyond a catchy title and a chucklesome cover. This book shows, if it needed to be shown, that while we can in complete fairness be dismissive of particular books, and even dismayed by particular trends in publishing, it's always, always a mistake to dismiss an entire category of fiction. What Will Come After stands as an outstanding example of the literary potential of genre fiction.

What Will Come After, Scott Edelman, PS Publishing, hb, 194pp. Reviewed from a pdf ARC. Available in the PS Publishing store.
Posted by Stephen Theaker