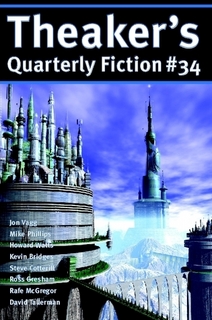 It's been a long time coming, but finally it's here! Unfortunately there are no female contributors to this issue, as previously discussed, but at least that means we don't have to talk about our feelings. Except for manly feelings about war and death and stuff, that is, and a bit in the convention report where grown men blub. But at least there are no girls around to see our tough facades crack!

What we do have though is a series of terrific stories, an indulgent editorial, our first ever convention report, and a huge review section: twenty-two books, seven movies, three audio reviews, one comic and one game. The cover is once again by the wonderful Howard Watts.

If you fancy taking a look, you could download the free pdf of this issue from us here (it's the perfect size for reading on an iPad), ebook versions are available for free from Feedbooks (including Kindle and epub versions), and the original version, a 156pp paperback, is available from Lulu for £3.99 (they also have a slightly higher resolution pdf available for free download).


Here are the brilliant people who made this issue possible:

Steve Cotterill lives and works in Birmingham.  He’s just starting out as a writer but his work has also appeared on the Horrorbound website and he is starting to plan his first novel.

Jacob Edwards is currently indentured to Australia’s speculative fiction flagship Andromeda Spaceways, as Jack of all Necessities (Deckchairs and Bendy Straws). To this issue he contributes a book review.

John Greenwood is the co-editor of Theaker’s Quarterly Fiction, as well as its most frequent contributor. His blog on rare and unusual books can be found at http://oxfambooksandmusicmoseley.blogspot.com.

Ross Gresham lives in Colorado. His contribution to this issue is “Name the Planet”. He previously contributed the excellent “Beyond the Fifth Sky” to Dark Horizons #54.

Douglas Ogurek’s Roman Catholic faith and love of animals strongly influence his work. He lives in Gurnee, Illinois with his wife and their pets. To this issue he contributes a pair of movie reviews. To TQF33 he contributed the astonishing “NON”.

Mike Phillips grew up on a small farm in West Michigan, where every summer he would tend sheep, mend fences, garden, build furniture, chop wood, and goof off. The time remaining he spent reading.

David Tallerman is the author of around a hundred short stories, numerous poems, reviews, comic scripts, and at least one novel.  Publication highlights so far include appearances in Chiaroscuro, Space and Time, Flash Fiction Online, and John Joseph Adams’s zombie best-of anthology The Living Dead. For more see http://davidtallerman.net and http://davidtallerman.blogspot.com.

Stephen Theaker is the eponymous editor of Theaker’s Quarterly Fiction. He wrote many but not all of this issue’s reviews, as well as the News & Notes and Contributors sections.

Jon Vagg mainly writes educational and coffee-table books. He is socially isolated, works late into the night and suffers from a highly deviant imagination. His stories have appeared, among other places, in Theaker’s Quarterly Fiction #30, Ignavia 3.2 and Ballista #7.

Howard Watts is an artist from Brighton. He has previously supplied covers for Pantechnicon, Dark Horizons and TQF.

So that's that! We're now hoping to do another two issues by the end of the year, catching us right up, and then next year we'll settle into a regular quarterly schedule.
Posted by Stephen Theaker