One for the Road, by Stephen King – reviewed 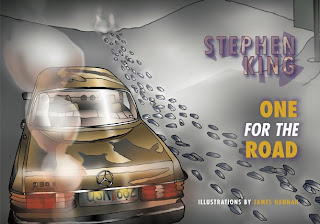 My third short book by Stephen King in recent months is another reminder that by not reading his work more regularly I’m really missing out. His Kindle novella UR was good, if a little goofy, and certainly much better than you’d expect an extended advert to be. The Colorado Kid was unusual too, very nearly an essay in fictional form; an investigation into the process and purposes of storytelling. Both left me keen to read more.

The book under review here is a collector’s edition of a short story previously collected in Night Shift in 1978, published this time as a neat little landscape hardback with sixteen captioned illustrations by James Hannah on every other page. This arrangement of text and art causes a problem in that the pictures quickly race ahead of the text in order to capture all of the money shots, giving away the entire plot, but it’s fair to say that most people willing to pay £75 for a twenty page story (£175 for copies signed by the artist) will be big fans of Stephen King, and hence likely to have read the story before, making that less of an issue than it would be for a brand new story or longer book.

The story itself is brief but very good. A stranger bursts into Herb Tooklander’s bar and immediately collapses, having walked through a blizzard to get there. There are grey blotches of frostbite on his face, but he’s more concerned for his wife and daughter, as are Herb, the narrator and the reader once they realise where he’s left them. It’s a story that hits at the heart of how it feels to be a father and a husband, the supernatural horror more than equalled by the horror of the father’s simple powerlessness. When he is taken back to find an empty car, and calls out their names, “you could hear the desperation in his voice, the terror, and pity him for it”. By that point the spoilers in the illustrations have erased any hope of a happy ending, adding a layer of painful fatalism to the story.

Good as the story is, even accompanied by attractive, colourful pictures it doesn’t justify the cost; no short story could. But as a collectable, it’s the kind of book it would feel good to own, a book you could be very proud of, and you’d be surprised to see it diminish in value.