Spectral Press #1: What They Hear in the Dark, by Gary McMahon – reviewed 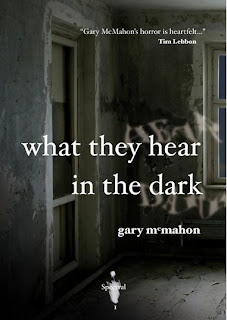 Becky and Rob have moved into a creepy new home following a family tragedy, one gradually revealed to the reader. The space between them, of things that can’t be said, is mirrored by the space beneath their stairs, a place where nothing can be said. There, Becky feels the presence of someone they both love and miss; Rob feels something more malicious.

This is the first in a series of chapbooks from Spectral Press, sold on a subscription basis, and given that Gary McMahon seems to be an author with a bright future – a bright future of spreading misery and darkness! – this is a very collectable little item.

The story for me suffered a little from the climax being anticipated by a premonitory dream; second time around is in theory more frightening because Rob notices something new, though I was distracted by wondering why he realised it then and not the first time. Logic aside (and where does logic enter into what you notice in a dream anyway?), what he notices at the end is truly shocking, and the story as a whole is moving and quite terrifying. As with “In the Skin” (in Different Skins), McMahon isn’t afraid to write about bad things happening to children, and that gives him the opportunity to hit us where it really hurts.

A handful of minor editing and formatting glitches demonstrate why a series of chapbooks is such a practical, sensible way for a small press to get started. The format echoes – copies, you might even say – that of the successful Nightjar chapbooks: similar cover stylings, lower case titles, and even a title that reminds of Michael Marshall Smith’s successful What Happens When You Wake Up In the Night. You might wonder if there is room in the market for two such similar offerings, but if Spectral continue to produce chapbooks as interesting as this one I’m sure there will be. Subscribe at http://www.spectralpress.wordpress.com.

Spectral Press #1: What They Hear in the Dark, by Gary McMahon, Spectral Press, chapbook, 20pp.
Posted by Stephen Theaker