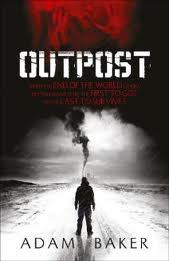 When the skeleton crew of a derelict oil rig in the Arctic Ocean begin to see TV news footage of food riots and carnage in cities across Europe, they begin to suspect that the relief ship scheduled to bring them home is not coming after all. Things quickly worsen, and soon the rig is cut off from all outside contact with the long night of Arctic winter closing in.


Adam Baker's taut, stripped-down writing style resembles a film-script more than it does a novel, although for thriller writers this is now the dominant mode. Many of his paragraphs will start with a terse, "C Deck. Dark, frozen passageways" or "The powerhouse. A steady hum from Generator Three" as though this were actually a part-novelised film script rather than a continuous piece of prose. Still, it keeps up the pace, and one cannot deny that Baker has a very disciplined, lean style. There's a relentless, cinematic focus on the action, switching efficiently between different characters as they grapple with various engineering problems aboard the rig and on the ice. Just now and then the author feels the need to state the obvious by putting into one of the characters' mouths the question that should really have been implied, and which any astute reader would be asking themselves already.

Baker has clearly done his research but wears it lightly. The various settings: the refinery platform itself, a drifting cruise liner, an old underground Soviet nuclear bunker, all feel convincing, but described without indulgence. Every description and conversation is reined to the relentless drive of the story itself, as new disaster follows on the heels of almost salvation. For my taste, this overwhelming concentration on plot palled. The characters do lack depth, and beyond about six core players, the rest of the 15 stranded workers as usually simply referred to as "the crew", an ill-defined mass of idle, tattooed toughs. The dialogue shows early promise, with a delicately drawn tension between Rev. Blanc and the gang of iron-pumping n'er-do-wells who threaten to disrupt the team spirit, but soon any shading between the voices of the main players is lost, and once blood begins to spill, their dialogue merges into the staccato delivery of all action movies, just as they all very quickly get used to handling shotguns and crushing people's skulls with their cramponed boots.

That Baker has made his heroine a depressed, super-obese priest and his hero a dope-smoking lapsed Sikh is an interesting move, and not one that I could easily imagine many Hollywood studios going for (their loss). Reverend Jane Blanc starts the book with a suicide attempt, but as soon as the food runs out and things start getting hairy, she very quickly sheds the fat, and is shinning up knotted ropes in the Arctic wind, throwing thermite grenades around and fitting neatly into the captain's shoes after he succumbs to a mysterious nanotechnological parasite that turns victims into bloodthirsty automatons. This transformation wouldn't seem slightly ridiculous if it was described with more psychological acuity, but Baker doesn't have a great deal of time for inner lives:

'I killed a man,' said Punch. 'That's who I am now. A guy who kills people.'
'The world has changed. We better change with it.'

Captain Rawlings (I pictured him as J.K. Simmonds playing the Editor of the Daily Bugle in Spiderman) tells the priest when he hears about the death of a man on the ice, "Christ. There will be a bunch of tears when they get back. A bunch of guilt. Well, that's your problem. Pastoral care." One gets the impression that Baker has as little time for emotional niceties. The crew soon learn that the parasitic plague has overrun most of the world, and that they are island of uninfected humanity trapped in the ice. Alright, so perhaps I shouldn't have expected too much philosophical reflection on this startling fact from a bunch of bored oil riggers, but surely that is why we find apocalyptic novels fascinating - civilisations in ruins, the end of history, the meaninglessness of human endeavour faced with such a crisis. Baker doesn't give them time to reflect on this - there's always another engineering problem to be overcome, a winch to be fixed or oil drums to be welded together.

Essentially this is a zombie novel on an oilrig, although there are hints that the infected develop some kind of primitive hive mind. It's not clear whether the metallic nanoparticles that infect people are of human or alien origin, but it hardly matters. Otherwise these are classic zombies: slow moving but relentless, bloodthirsty (but not for their own kind), dim but occasionally able to recall aspects of their former, human existences. One of the most effective sections in the book is narrated from the point of view of a character whose mind is slowly being overtaken by the disease, but who struggles to save her team-mates from her own bloodlust, before succumbing. The disjointed narrative reminded me of a particularly bad acid trip.

We never really find out exactly what has happened back in the civilised world, although one character Nikki, escaping on her own on a home-made raft, comes close to the shore of Norway before seeing what she takes as the light of a nuclear detonation over Europe, and losing her mind entirely, navigates her way back to the oil rig. For me this was the weakest part of the plot - Nikki has been drifting on the Arctic ocean for weeks, but apparently is able to find her way back to her point of origin with the aid of her hallucinated dead boyfriend. She becomes psychopathic mastermind too, explaining her insane plans to her hostages with clichéd calm.

I read this book much faster than I would normally read, overnight when I was ill in bed. It suited my mood - I wasn't up to reading anything that would take too much concentration. It's not a memorable novel, but as a zombie/techno thriller it definitely does the job.
Outpost, by Adam Baker, Hodder and Stoughton, hb, 369pp, out on 14 April 2011. Available from Amazon UK, Amazon US