Doctor Who: Hornets’ Nest 1 – The Stuff of Nightmares, by Paul Magrs – reviewed 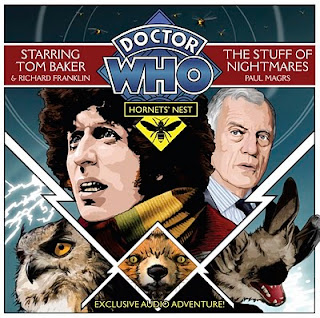 Here the BBC manage what Big Finish never quite could: persuading Tom Baker back to the role of the Doctor [or at least they hadn't when this review was originally published in Prism – well done Big Finish!]. This is a post-Fendahl Doctor who apparently looks just like he did in the seventies (which could well mean he looks like Jon Pertwee, depending where you stand on UNIT dating).

Considering this teams Paul Magrs and Tom Baker, known respectively for their eccentric novels and performances, this feels awfully old-fashioned, almost reined in. If anyone was going to provide Baker with the talking cabbages he craved, you’d have put money on Magrs, but not this time. We do get the Doctor as hermit, though, another Baker suggestion rejected by the TV production team. He’s keeping watch on a cottage filled with stuffed animals that occasionally attack him. Why? That’s the story he begins to tell Mike Yates.

Disappointingly, this isn’t an audio drama, but rather, as it says on the back cover, “a multi-voice adventure”. First Mike Yates tells the story of how he found the Doctor, then the Doctor tells the story of how he got stuck in the cottage. Bits here and there are dramatised, but it’s more like an audio book, of which this CD comprises just one of five parts, than a Big Finish production.

That’s a shame, in that Tom Baker sounds most like the Fourth Doctor during the exchanges of dialogue, and least like him when narrating the story. It’s hard to imagine the restless, impatient Fourth Doctor sitting in one chair long enough to tell such a long story! Perhaps here we’re meeting the side of the Doctor who sits down to write in those five-hundred-year diaries. As narrator, he’s largely unable to deliver the exciting line readings that were such a feature of his performance as the Doctor.

But the times when he does are the high points of the CD, and Magrs gives him some great material: lines like “What had I smoked out of the badger’s head?” or “I opened up the badger’s brain using very tiny brain scissors.” Even when it doesn’t sound much like the Fourth Doctor, it’s still Tom Baker, and listening to him read a new Doctor Who story of any kind is a pleasure of the very first order. As long as you come to this expecting a reading rather than a play you should go away happy.

Doctor Who: Hornets’ Nest 1 – The Stuff of Nightmares, by Paul Magrs, read by Tom Baker and others, BBC Audio, 1xCD. Amazon US

. Amazon UK. This review originally appeared in Prism, the newsletter of the British Fantasy Society.
Posted by Stephen Theaker