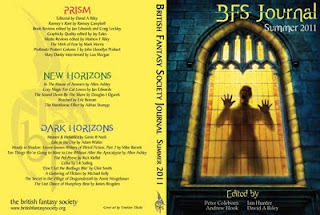 I'm not as involved with the BFS as I used to be – I went from doing eight or nine jobs for them to none in the space of six months (and by gum that made Mrs Theaker happy!) – but I'm still very excited about each new mailing.

The third issue of the BFS Journal has just been announced as coming out in late June. The line up, if you can't quite make it out on the cover, is as follows:

I'm very glad to see the return of the Chairman's Chat and BFS News to the journal – I do think it's good to have something in the mailing that makes us feel like members of a society rather than just subscribers to a magazine. (Although I remember struggling to find the time to write the three Chats of my brief but glorious reign!)

I'm a big fan of all the columns, especially The Mark of Fear, and I'm really happy to see a story from TQF contributor Douglas Ogurek in there. Mike Barrett's articles are never anything less than fascinating.

I only had one review ready in time for issue two of the journal (a scintillating piece on cine-classic Death Race 2), but I sent in seven for this issue:

Not sure how many of them will have made it in – the current BFS chair is a big fan of Doctor Who (and a very distinguished one!) but other members might find their patience tested by so many reviews of Doctor Who audio adventures!

As ever, if you want to get hold of this issue, there's only one way: join the BFS!
Posted by Stephen Theaker