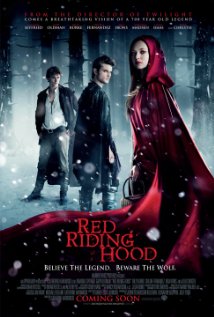 “From the director of Twilight!” So touted the advertisements for Red Riding Hood. This film is to Twilight as cardboard is to concrete.

Valerie loves woodsman Peter, whose black clothes and lip-raising sneer make one wonder whether he will start pumping his fist and singing “White Wedding” or “Eyes without a Face”. Alas, Peter, despite the voracity of his purposely dishevelled hair, has not the financial means to wed Valerie. But Henry, who resembles a younger version of the potty-mouthed comedian Bob Saget, does.

But wait. The wide-eyed heroine faces another, more life-threatening problem: after a long sabbatical from killing, the wolf that terrorized Valerie’s village has sliced apart her sister.

Just when the simple-minded villagers think that they’ve slain the wolf, the coach of Father Solomon (Gary Oldman) rolls into town. Solomon delivers a dramatic monologue in which he warns the villagers that the wolf exists and is one of them, while also giving the second-rate actors on the set a lesson in finer thespian techniques. What was Oldman, an esteemed actor, thinking when he signed on for this one?

A naïve girl caught between two young men. Sound familiar? It’s no surprise that Red Riding Hood director Catherine Hardwicke also directed Twilight. However, Edward Cullen and Jacob Black are much more developed characters than Peter and Henry. The Twilight leads have a detailed backstory and motives, whereas their bastardized versions simply jump through plot hoops.

Moreover, one of the most compelling elements of Twilight is the journey the audience shares with protagonist Bella. When Edward is introduced, his oddness is just as enchanting to her as it is to the audience. Conversely, at the onset of Red Riding Hood, Valerie and Peter are already an item. Where’s the fun in that?

Hardwicke also borrows unabashedly from M. Night Shyamalan’s The Village. Both films feature a remote village terrorized by an unknown assailant from the surrounding woods. However, whereas each of the characters Shyamalan focuses on is integral to the plot, several of Hardwicke’s seem thrust into the film for no other reason than to increase the mystery of the werewolf’s identity. Additionally, The Village’s cast (e.g. Joaquin Phoenix, Adrien Brody, William Hurt) make their Red Riding Hood counterparts look like they’re in a high school play.

Red Riding Hood attempts to win over the viewer through two mysteries. First, which young man will the wide-eyed heroine choose? Second, who is the werewolf? However, the many clichés, the poor dialogue, the overly blatant references (e.g., “What big eyes you have”) to the film’s inspiration, and the underdeveloped characters prompt a third mystery: who cares?

When the mystery behind The Village is revealed, it is breathtakingly unexpected. The climax of Red Riding Hood, on the other hand, is disappointing. The mystery of the latter could have been solved much quicker; all Peter had to do was go to the city where his chic salon was located and solicit help.

In Writing in General and the Short Story in Particular, American author and Esquire fiction editor L. Rust Hills (1924–2008) wrote, “The trouble with mystery as a structure is that the writer enters into competition with the reader instead of partnership.” Such is the case with Red Riding Hood, and when the competition is over, the director has lost in her attempt to live up to Twilight, and the only thing the viewer has won is, depending on his age, a new way to style his hair. – Douglas J. Ogurek
Posted by Stephen Theaker