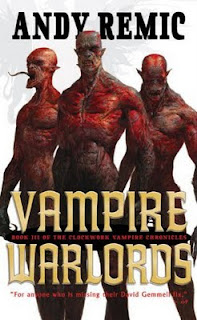 The events of a previous book freed the three Vampire Warlords from captivity. While Kell (basically Druss the Legend with a Stormbringer axe) goes on the run to find allies, the ferocious warlords make themselves at home in Jalder, Vor and Gollothrim, eating babies, siring vampire minions, and building ships to spread their curse across the world. Kell's quest will take him to a mountain prison and then the stronghold of his bitterest enemies, accompanied by womanising popinjay and new-made clockwork vampire (and yes, that does seem as silly in the book as you might think – cogs fall out of them when they get injured!) Saark, Kell's granddaughter Nienna, and Myriam, another clockwork vampire.

This is a book that takes a long time to get going, the first half reminding me of nothing so much as the Twilight films, with their interminable chats punctuated by fleeting, very welcome bursts of violence. The journey from Skaringa Dak to the Black Pike Mine prison is essentially a long camping trip, and how much readers enjoy it will depend on how they like the company. Saark and Kell are grudging friends in the buddy cop mould, the one who gets annoyed and the one who is annoying – Gibbs and DiNozzo. But their banter is not as funny as it thinks, and goes on for far too long. "But enough talk, " says Kell at one point, only for the conversation to go on for pages more. By the midpoint of the book I was regularly yelling "Shut up!" at it. But beyond that point it gets better. From the arrival at the prison until the final battles Kell and Saark are often separated, or have more important things to do than bicker.

Kell's plan to recruit warriors from the prisoners is pretty daft – I think the book underestimates the Sariah Gallego factor – and the scene in which he wins them over – like too much of the book – has a distinct whiff of "Will this do?" But in a funny way the sillier the novel got the fonder I became of it. Words are italicised for emphasis in the goofiest way, and there's a definite touch of the Fanthorpes to Andy Remic's writing style: "Kell filled the space. He was vast, a giant, a titan, a god. His face was bathed in shadows, gloom was his mistress, darkness his master, and Kell stood with Ilanna lifted against his chest and Saark felt fear, knew fear, for this was it, the end, his death come so soon and for what?"

Less welcome were the Guy N. Smith style sex scenes: "she shivered in anticipation and thrust herself painfully against him, in need, in lust, and his hands came to rest on her buttocks, firm and hard from so much travelling in the wilds." And some writing that was just plain bad: "You’re carping on like a fishwife on a fish stall selling buckets of fish to rank stinking fishermen" or "The vampires watched in silence, like kicked dogs licking their wounds. Licking their balls." Eh? When faces were ripped off and heads twisted off, when eyes popped out on stalks, the book almost had me – it almost had a purpose – but I couldn't quite forgive it those tedious fireside chats and the perfunctory plotting.

I think the stupider this author's books get, the more outrageous, ludicrous and laughable they become, the more I'll enjoy them, but I couldn't recommend this one unless you've already read every single book Joe Abercrombie has written, or for that matter William King's Gotrek and Felix novels, which have a similar tough guy/dandy relationship at their heart but are much better. About the best I can say of this one is that if you excised the first half of this book you'd be left with a novel Thongor or Kyrik wouldn't be too embarrassed to appear in.