Doctor Who: The Sentinels of the New Dawn – reviewed by Stephen Theaker 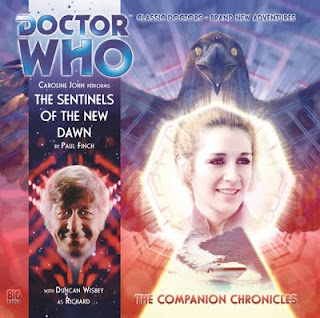 After leaving U.N.I.T. Liz Shaw returned to her work at Cambridge University, but the third Doctor didn’t leave her life completely. In this audio adventure we hear about the time she called him in to advise on a friend’s special project: a time dilator. Of course he’s unable to resist tinkering, and then giving it a whirl, and before you know it they’re waking up in 2014 and being greeted by Richard Beauregard, a posh young post-grad with a “hard, confident smile” who is soon revealed to be a member of the New Dawn. They’re a dodgy bunch with big plans for Britain and a big flying biomechanical beast, the Helidromus, to make sure those plans don’t meet with any opposition.

It’s a brave writer who asks an English actress with a plummy accent to perform the dialogue of an African dictator (this one plays a crucial role in the plans of the New Dawn), and a braver actress who accepts the challenge, but if that’s all this adventure is remembered for it would be a shame. Caroline John’s Pertwee isn’t perfect either, but there’s never any doubt that we are listening to Elizabeth Shaw. There are interesting reflections from Liz on why things didn’t work out for her at U.N.I.T. – the Doctor’s life is simply too intense for an ordinary human – and we realise how little she got to know him – she doesn’t really know which way he’ll jump with regard to the New Dawn.

(On a first listen I’d thought they were the people Mike Yates got mixed up with in Invasion of the Dinosaurs, but the special features explain that they first appeared in Leviathan, a sixth Doctor audio.)

The two-episode structure of the Companion Chronicles once again proves a triumph, these two episodes squeezing in so much more than was usual for Liz’s period on the show, when every story was stretched out for seven episodes. The Doctor is for once allowed to be as clever as he really is – there isn’t a lot he can’t sort out in an hour-long adventure when he puts his mind to it! The ending is swift, sudden and decisive, but leaves room for future stories about both Liz and the New Dawn.

One of the most pleasant things about the story – and those like it – is that it makes the Doctor seem much nicer. On screen we see the third Doctor as something of a serial monogamist, but stories like this show his life continuing to intersect with those of former companions, still a friend even when life takes them in different directions – just as Rose, Mickey, Jack, Martha, and Donna all returned for encores in the modern programme.

Doctor Who, The Companion Chronicles: The Sentinels of the New Dawn, written by Paul Finch, read by Caroline John. Big Finish, 1xCD, 67mins. Amazon US