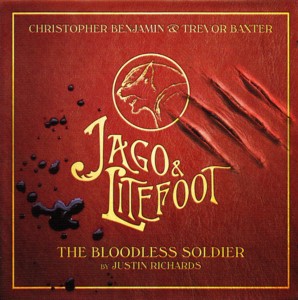 Henry Gordon Jago is a theatrical impresario who has lost his theatre, Professor Gordon Litefoot a respectable doctor who helps the police when they have a body to examine. They met for the first time on television, in The Talons of Weng-Chiang, one of the fourth Doctor’s best-regarded stories. Jago & Litefoot: The Bloodless Soldier by Justin Richards (Big Finish, 1×CD, 50 mins) is the first in a series of audio adventures, sold in box sets of four stories. Their “investigations of infernal incidents” have been successful enough to reach a fourth series, but I’m starting at the beginning. Or almost the beginning; they were previously to be heard in The Mahogany Murders, one of the Companion Chronicles, but I missed that one. Christopher Benjamin and Trevor Baxter return as Jago and Litefoot, respectively, their full-blooded, plummy tones giving the story an instant gravitas. They play their roles with complete conviction, approaching the material with the same seriousness they might give to a Radio 4 adaptation of a classic literary novel. The relish with which they discuss the food and drink served up by Ellie at their favourite pub made this listener wish he was right there at the table with them. The word I’m looking for is gusto!

And that’s the way their characters approach this story, of an army captain brought back from India with a nasty wolfish infection. While his loyal men try to find a cure, one less loyal subordinate looks to exploit him for money—which gets Jago involved. In parallel, Jago is called to examine a clawed and bloodless body left by the captain’s feeding.

This was one of my favourite Big Finish dramas so far, despite the absence of the Doctor. The story is quite short, but works very well, and the emotional conclusion, where Jago and Litefoot are faced with the same terrible necessity but only one can go through with it, tells us much about their respective strengths, and why two such different characters should find such support in each other’s company. I wasn’t keen on Hari Sunil (an Indian Van Helsing who travels to England to stop the curse spreading) being played by a white actor affecting an accent—nor on his proving so ineffective when it mattered!—but had I not seen the cast list I doubt I’d have griped; the acting throughout is in fact very good, as is the sound: I’ve rarely heard such alarming noises emanating from my stereo’s speakers! Overall, a very good adventure, and I’m very glad of having another three stories in the series one box set to look forward to.
Posted by Stephen Theaker