The Bookman by Lavie Tidhar – reviewed by Stephen Theaker 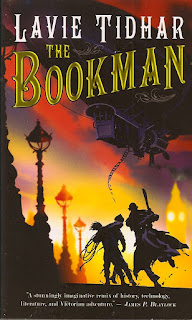 The Bookman by Lavie Tidhar (Angry Robot, ebook, 4253ll plus extras), is the first in a series that has so far run to three volumes (the sequels being Camera Obscura and The Great Game). It’s set in a world much changed since Amerigo Vespucci landed on the island of Shakespeare’s play The Tempest. Caliban’s people, Les Lézards, have installed themselves as the rulers of our island nation, whales sing in the Thames, the police are supported by automatons, airships fly overhead, and Moriarty is Prime Minister. Orphan is a young poet given to literary mischief, rebel rather than revolutionary, but when tragedy strikes a mission to Mars his need to set things right throws him into an adventure that will take him from London to the Mysterious Island of Jules Verne, and leave the future of the planet in his hands.

The Bookman didn’t bowl me over to quite the extent that Cloud Permutations and Gorel and the Pot-Bellied God did (reviews of those two should appear in our next issue), and it wasn’t as challenging, but I had a good time with it. Part of the book’s appeal is that Orphan’s choices are not easy; there are few people he can obviously trust, and many factions battling to come out on top. Irene Adler—in this world, a police officer—seems honest and trustworthy, but isn’t her job to protect the status quo? Or the Mechanical Turk, the chess-playing robot: sincere and intelligent, but his ultimate interest is the survival of his own kind. Or the mysterious Bookman? The Turk says he “almost never deals directly”, but he takes a direct hand with Orphan, promising everything he wants if he succeeds in his quest. All this intrigue and mystery gives the novel an interest beyond the spotting of celebrities fictional and historical—though that is, admittedly, fun.

The ebook has a few small issues. Paragraphs are separated by a couple of millimetres, at least on actual Kindles (on Kindle apps it disappears)—hardly noticeable, but annoying once you’ve seen it. In a few places words are split by spaces, and other words are welded together; probably where they were hyphenated in print, and "may" appears for “might” in a few places. Unattractive straight quotes are used, and there are no chapter marks, only section marks. But I mention that stuff mainly because it interests me, not because it should stop you from purchasing this inventive, entertaining novel.
Posted by Stephen Theaker