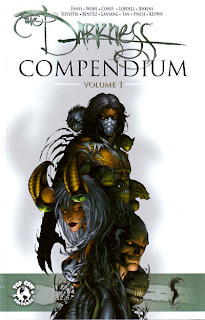 Even James Kochalka’s Super F*ckers seems grown-up compared to The Darkness Compendium, Vol. 1 (Top Cow, digital collection), which is 1169 pages of anatomically incorrect pin-ups, misogyny and lumpy dialogue. Possibly the worst comic I’ve read, and certainly the worst comic of which I’ve read almost twelve hundred pages, it did become moreish after a while, in the sense that it never asked anything of my brain, except when it came to grasping the dangling strands of a bunch of daft crossovers. It’s telling that the book’s most significant events (aside from Jackie gaining his powers at the age of 21) occur outside its pages, in a Batman crossover that isn’t included here.

Jackie Estecado is the wielder of the Darkness, a supernatural force, one of three that battle for supremacy over our realm (the others being the Angelus, usually manifesting as a sexy woman in a Borat bathing suit, and the Witchblade, owned by Sara Pezzini). He’s young, dumb and full of you-know-what, and such an idiot that, after finding his new powers come at the cost (pun intended) of killing him the second he impregnates a lady, it takes him five hundred pages or so to realise that doesn’t prohibit non-procreational sexual pleasures. Some parts of the book would have you think he’s a hitman with a heart of gold, but to believe that you’d have to ignore some thoroughly unpleasant behaviour.

The best issues are those written by Garth Ennis, but even then the reader has to peer past the poster art to imagine what the book might have looked like in the hands of an artist who can tell a story—and with Ennis as writer, you can’t help wishing it was Steve Dillon or John McCrea, although to be honest their talents would have been wasted on this rubbish. So why did I read it? Because I’ll buy any comic if it’s cheap enough, and once I’ve started a book I like to finish it. A couple of issues towards the end feature Cervantes as a character, as if to mock the reader who made it that far: you read a twelve hundred page book and it was this one? Even though you haven’t yet finished Don Quixote? Idiot!

Along with this I bought a bunch of later books in the series written by Phil Hester, and they can’t be as bad as this, surely? I’ll let you know.
Posted by Stephen Theaker