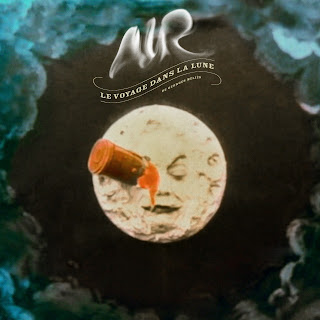 Le Voyage dans la Lune (EMI, CD, 32 mins plus DVD, 17 mins) isn’t the first soundtrack work by Air (that would I think be The Virgin Suicides (2000), an album so heartbreaking I could only listen to it once)—but it is nevertheless very special. The music began as pieces to accompany the restored colour version of Georges Méliès’ 1902 film, which is included here, and so, before discussing the music, a few words for the film. Though most right-thinking people have a natural abhorrence of the colourisation of black and white films, this is something rather different; it was made at the same time as the original film under the supervision of Méliès himself, with every frame of the story hand-painted: the debate at the academy and the preparation of the rocket; the journey to the moon; the hallucinatory sleep sequence; the battles with the insectoid lunar inhabitants; the triumphant return home. Every bit of it is visually astonishing, and the colour is amazing, the brush strokes clearly visible. The film has lost none of its interest or entertainment value: the only disappointment for my children was its short length. If someone made the same film today you’d be impressed by their cleverness; that Méliès did it in 1902 is beyond belief. Or rather, it would be, if we didn’t have the evidence on DVD. And what about that Jules Verne, eh? Inspiring hit films for over a century now! (Shame they’re not all as good as this one.)

The album takes a slightly different order to the film. It opens with the drums, spikes and querulous voices of the “Astronomic Club”, but ends with “Lava”, which begins like something from a seventies film and turns into the theme from Hitch-Hiker’s Guide to the Galaxy (or “Journey of the Sorcerer”, as Eagles fans might know it), music that comes from the mid-point of the film. The “Retour sur Terre” takes place in track three, a short piano-led piece that could have been drawn from the Moon Safari sessions. It leads into track four, the exuberant, punchy Geoff Lovesque “Parade” which soundtracks the final sequence of the film, and then we’re back on the moon with “Moon Fever”—imagine an extended version of the ambient introduction to Fatboy Slim’s “Right Here, Right Now”—and the aggressive synth-funk march of the “Sonic Armada”. The rocket departs at last in track nine, “Cosmic Trip”, with a breathy glide that probably doesn’t quite replicate the experience of being shot into space in a huge bullet. Which is all to say that this isn’t a science fiction disco opera in the style of Jeff Wayne’s War of the Worlds (for all that it makes you wish Air would write one). But it works wonderfully as an album, the order of the tracks making musical, if not logical, sense, the shifting moods—from pleasant drowsiness to the bold loopiness of your very best dreams—constantly provoking interest. Where vocals appear, they tend to be slow, often spoken, mostly in English, usually with a sense of disorientation. The announcer of the countdown to ignition in “Seven Stars”, for example, sounds rather like a drunk Tom Hardy (and so of course that is one of my favourite tracks).

Easy listening for science fiction fans, perhaps, but I’ve listened to few records more often this year and anything new I buy will have to do very well to catch up. It’s the kind of album of which you simply cannot tire. Unless you get up and march around your office whenever “Parade” comes on. Which I don’t.
Posted by Stephen Theaker