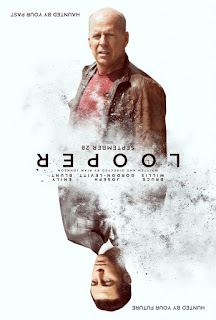 In the world of 2044, economic collapse has given rise to social degradation and the predominance of organised crime, wherein the mob from thirty years further into the future abducts people and dumps them back in time to be executed. The men who carry out these hits are called “loopers”, so named because their job entails early retirement and a payout sufficient to keep them living the highlife for thirty years, whereupon each man will be strapped to his own bonus and sent back thirty years to be shot by himself – his final kill. So far, so good for Joe Simmons (Joseph Gordon-Levitt), but by the year 2074 a ruthless new mafia boss has emerged and is closing all the loops. Joe already has his future planned, but his older self (Bruce Willis), having lived that life, then decides that he’s not quite ready to die…

For those moviegoers who happened to see Moonrise Kingdom and Looper across consecutive sessions (is there a Facebook page for that?) the inevitability of Bruce Willis’s reversion to type may have offered an oddly disparate sense of reassurance during the popcorn-strewn shuffle from one cinema to the next. Nothing against Willis’s choosing to broaden his horizons in the former, but with the latter film offering the prospect of his bald eagle head in jaded action hero mode, with trademark cynicism, smirks and exasperated outbursts, many are those who would have crossed the foyer as if one-handing the wheel of a battered but faithful old car – one with roll-down windows and tapes in the glovebox. Bruce Willis! The man’s a walking comfort zone. And, of course, throw in SF time travel paradoxes and surely one cannot help but (p)reminisce about the quintessentially dizzying heights of 12 Monkeys.

Yet, for all of Willis’s charisma and on-screen presence, and for all that Looper presents as a serious feat of SF assemblage, it carries, too, a sleekness that seems at times forced rather than naturally elegant – not unlike the New versus Classic design Beetle. Specific instances of this over-shininess are difficult to pin down – after all, the future portrayed in Looper is dystopian gritty rather than polished chrome, and important plot elements actually are worked in quite naturally, rather than being signposted in ACHTUNG! capitals for those wide-eyed, empty headed, screen-addled peons whose lives are spend in faithful indenture to the Lowest Common Denominator – but nevertheless, something feels wrong. Perhaps it is the too-new smell of the film’s cinematographic upholstery; the overly diligent buff of its editing…

Looper takes the viewer on an absorbing, at times disturbing drive through a little explored variant of the time travel conundrum – neither an open nor a closed loop (can change/can’t change) but rather a concurrent loop (am changing/am being affected by change). Johnson’s exploration of this concept is enhanced by a carefully conceived though unobtrusively portrayed societal backdrop, and by a marked preponderance of human interaction over supposedly edge-of-your-seat action scenes. The mythology of the self-fulfilling prophecy is as compelling to audiences today as it was to the Greeks thousands of years ago; but regardless of whether or not the time travel causality logic holds traction (and, let’s face it, there’s quite a bit of frying pan fat spattered over the loop of fire), the film at its core contains several ill-fitting conceits that like a poorly adjusted seat tend to distract those of us too fidgety of mind merely to take in the view. Rather than retuning these parts to a logician’s specifications, Johnson’s maintenance policy seems to have been one of overtly acknowledging the use of scriptyard scraps (Bruce Willis: “I don’t want to talk about time travel, because if we start talking about it then we’re going to be here all day talking about it, making diagrams with straws”) and then sweeping them under the bonnet; and whereas this may in some respects be preferable to offering up the usual balderdash explanations, nevertheless it requires the viewer to take as read such concepts as: hitmen being called upon to kill themselves (unnecessary and, as history will show in most instances, rather asking for trouble); people being personally assassinated at all (as opposed merely to being time-deposited directly into the furnaces where they are dumped after being shot); a mafia boss so shadowy that even his/her gender is unknown, yet whose exact date and place of birth can be determined; and, underpinning the entire scenario to the point where no mechanic in his right mind would dare slide underneath, a future society devoid of a social welfare system, where the mob is powerful enough to monopolise time travel and make almost anybody disappear (quite literally), but where these all-powerful crime lords cannot dispose of a body without fear of some non-corruptible, super-powered forensics taskforce using “tracking technology” to scour the furnaces of the world and somehow bring them to justice.

Tracking technology? Even as a first draft placemarker that’s lamentably clunky. Why not call upon the statute of limitations? Or – Why, yes, ma’am: a tax dodge. There’s a nice tip of the fedora to poor old Al Capone. Or what about good old honest greed-mongering, where the silver and gold used to pay the loopers has become severely deflated in value across thirty years of being feedback-looped into the mafia-controlled economy? Granted, those are just off-the-cuff ripostes extemporised during the closing credits, and yet there must have been something more convincing; some other colour on offer; for it cannot be denied that a plausible scenario is facilitative of strong characters (which in the case of Looper they are) being afforded the means by which to put a film through its paces, rather than merely given the keys to an ice-cream van and then left to invest their performances in slow-trawling the streets. A lick and a promise is one thing, but tracking technology? That’s about as effective a burnish as shammying your Ferrari 250 GT with a morning star.

And so the twelve monkeys (see, hear, speak, and for the other nine, script no evil) are left to scratch their heads and wonder at what might have been.

Notwithstanding its somewhat laissez-faire approach to “science” fiction and the sanctity of the dialectic ecosystem, Looper does remain worthy of a test drive, either across the silver screen or via one of the more reputable small screen dealerships. Bruce Willis is Bruce Willis. Emily Blunt and Joseph Gordon-Levitt do what they do (although the latter perhaps lacks sufficient pathos to give real credence to the film’s ultimate dénouement – despite his being the wrong age relative to Bruce Willis, friends of the Moonrise Kingdom/Looper double may well have preferred Ed Norton). Looper’s pacing is good; its moral ambiguity bears up under scrutiny; the characters and their conflicting viewpoints demand consideration: but though all the parts thus seem in place for putting together a “sent from the future” classic (no Schwarzenegger, obviously, but Garret Dillahunt makes a suitably menacing appearance, echoing his role in The Sarah Connor Chronicles), SF fans ultimately will be left to lament that Looper has not turned out to be the Terminator it just possibly could have prevented itself from not becoming.

Hasta la vista, baby; or, as Herbie the Love Bug might honk out in Morse code while blinking earnestly with his headlamps, “Metallic paint has not yet been invented, but thirty years from now it will have been.” Well, quite – but it’s the engineering and bodywork that makes for an abiding place in cultural memory, not merely the cosmetics of here today, gone tomorrow, headstone to read: