The Long Earth, by Terry Pratchett and Stephen Baxter – reviewed by Jacob Edwards 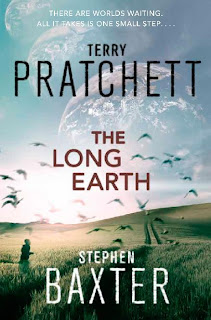 When plans for Willis Linsay’s “stepping” device are posted online, humanity suddenly discovers the capacity to travel “east” or “west”, one world at a time (without iron but with quite some nausea) across a seemingly infinite number of parallel Earths, all of them untouched by humankind. For Joshua Valienté, a “natural” stepper who can traverse the Long Earth at will, this offers the chance to seek out the Silence that has called to him ever since his somewhat unusual birth, while for the rest of the populace it brings turmoil, upheaval and the bittersweet prospect of an endless frontier. Accompanying the ever-evolving super computer Lobsang, Joshua embarks on a voyage to uncover the cosmic significance of the many worlds opened up by Willis Linsay . . . and to find out what strange force is driving other humanoid life back towards the “Datum” Earth.

As a writer Terry Pratchett is best known for his thirty-nine (to date) Discworld novels, which in the modern world of pre-ordering seem regularly to become New York Times Bestsellers even before they are written. But while Pratchett’s comic fantasy made him by turn of the millennium the most shoplifted author in Britain,[1] the often satirical advancement of his Discworld civilisation (which at its behavioural heart bears many striking resemblances to the real world, despite resting on the backs of four gargantuan elephants who themselves stand stoically atop the shell of an astronomically large space turtle), has by very dint of its popularity kept him from traversing the science fiction path upon which he first embarked with The Dark Side of the Sun (1976) and Strata (1981). Pratchett does, however, find time for the odd non-Discworld novel – the masterful Nation, for instance, in 2008 – and with The Long Earth he returns at last to an idea he started working on twenty-five years ago, before the growing success of Discworld (by that stage at book three, Equal Rites) prompted him to shelve the project.[2]

Pratchett has on rare occasion collaborated with other authors – most notably with thentime fledgling novelist Neil Gaiman for the compocalyptic fantasy Good Omens (1990) – and in the case of The Long Earth and its as-yet-unwritten sequel, his teaming up with science fiction heavyweight Stephen Baxter clearly signposts an intent to pursue the quantum worlds scenario for its “hard” SF rather than humorous potential. Yes, there are unconventional nuns, and the stepping device used to travel between worlds is powered by a potato. True, the book features a Tibetan motorcycle repairman reincarnated within a computer and so legally declared the world’s first human being of artificial intelligence. But the scenario Pratchett and Baxter have posited does not lend itself to out-and-out humour, and so these absurdities are presented with something akin to a loss adjustor’s matter-of-factness – almost without exception the many worlds setting is used with utmost seriousness to explore the evolutionary and behavioural aspects of people and society. Anybody expecting The Long Earth to be “Pratchett” and, ergo, comedic, will instead find what humour there is to be wry and distinctly understated – more a faint watermark, in fact, than a text-spanning belly laugh.

Pratchett deserves kudos for stepping out beyond his (and his readers’) comfort zone, but for all that “Datum” Earth and the stepwise worlds offer scope for intellectual and imaginative exploration, The Long Earth as a novel presents itself in somewhat ungainly a fashion (beyond even the rather sic-ly possessive apostrophe mishap of page eighteen). One key aspect of Pratchett’s Discworld books has been their sense of unfolding mystery, whereas in The Long Earth, although various “what’s happening here?” breadcrumbs are dropped in with the usual Pratchett artfulness, they seem almost immediately then to be gobbled up by parrots who digest the scenario and subsequently exposit its erstwhile mysteriousness in squawking information dumps. The storyline is stop/start for much of the book’s first third, and even when it picks up momentum and, through Joshua’s and Lobsang’s dirigible exploration of the expanding westward frontier, takes on some of the unfolding intrigue of Philip José Farmer’s To Your Scattered Bodies Go (1971) and sequels, there remains to the nonplussed reader a certain homogeneousness of character and dialogue, while the narrative itself drifts unconcerned past incidents of suspense, and continues to be broken up by the insertion of tangential and, in the case of one section that presumably is supposed to depict Australian Aborigines, rather incongruous vignettes. The overall impression one receives is that Pratchett and Baxter kicked around some (very good) ideas regarding what would follow in the wake of their hypothetical Step Day – indeed, that they went off separately and developed a set of one-off or minor characters – but that they couldn’t quite find a way to incorporate these as a cohesive part of the larger story. Perhaps it could be argued that the jumble of thoughts in some way evokes the confusion and disorientation that humanity experiences in the novel, but in all honesty this smacks more of an apologist’s devotion than an unbiased appraisal. In unvarnished truth The Long Earth is more of a prolonged literary brainstorm than a novel.

Notwithstanding this assessment, it remains clear that Pratchett and Baxter have put a great deal of consideration into their “what if...?” scenario. The Long Earth might well be worth reading just for its concepts, and now that its authors have taken the first step in exploring the consequences both of infinite resources and of the evolution of humanity and human society, further books in the series may indeed offer up properly boiled potatoes and a smoother voyage across the many permutations of stepwise imagination.