The Super Barbarians, by John Brunner – reviewed by Stephen Theaker 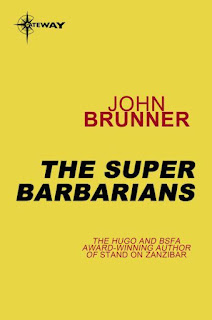 The first paragraph of The Super Barbarians by John Brunner (SF Gateway, ebook, 2655ll) sets the scene; it’s fifty years since our first interstellar war was lost, twenty-five since the Great Grip was loosened, ten since humans were accorded rights on Qallavarra, home planet of our conquerors. The Vorrish have an elaborate social structure and a convoluted language to match, but despite their military superiority they seem lacking in certain areas: their cars are imported from Earth, there are members of their nobility who cannot read or write, and superstition runs rampant. All are things that Gareth Shaw, a lowly human in the Household of Pwill, begins to realise he can turn to his advantage—and that of all humans.

Though The Super Barbarians is far from being one of Brunner’s masterworks, I would have enjoyed it very much had this particular edition not been such a mess. It’s interesting in that it’s a tale of the indomitable human spirit, of aliens who just can’t—at least in the long run—cope with our wiles, determination, hard work and technical know-how; not at all what you would expect from the author of dour, pessimistic novels like Stand on Zanzibar and The Sheep Look Up. One suspects it was written very specifically to appeal to Ace, its original American publisher. There’s no doubt that the storyline panders to our vanity as a species, but it makes for a fun, pleasant and hopeful book.

Unfortunately, this Gollancz/SF Gateway edition of the book was, like the previously reviewed Dumarest 4: Kalin from the same publisher, utterly dreadful, clearly having been scanned in and never checked, with ridiculous mistakes from start to finish. Typical errors included: “On the Vorrish side it was tempered with a land of puzzlement”, “This was another point they bore in mind when dunking of us”, “Where is he JIOW?” and an order “not to supply any more of this poison to my 8011” (meaning son). It’s clear that Gollancz only got all those thousands of books out so quickly by cutting all the corners. And it’s not as if the books are particularly cheap. I won’t buy any more SF Gateway books without checking the Kindle previews; wish I hadn’t pre-ordered so many before they were released.
Posted by Stephen Theaker