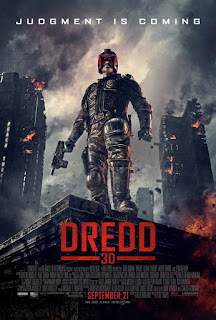 Dredd 3D certainly deserves its 18 rating. Now, I’m not a great fan of 3D – I find it false from a film POV, an augmented reality akin to Google’s project glass: https://plus.google.com/+projectglass/posts – a Sinclair C5 for the noggin, with apologies to William Gibson. Wearing those huge 3D glasses makes me feel like a participant at a Buggles convention, thankful for the darkness of the cinema. It’s not reality, and for me not how film should be presented. Dredd bears this out with abundance, many scenes not tailored specifically for the 3D effect suffering (as have other 3D films in recent years) from foreground distractions and blurry black artefacts.

Dredd is brutal, unrelenting, graphically violent on screen, implying it off. It’s full on – but lacks colour, favouring the grey tones of despair. The soundscape thunders around you, a marching drum of determination, punctuating its claustrophobic setting. Sight and hearing are bombarded – perhaps to the point of admitting, “too much!” Hardly a Buggles convention.

A triple homicide takes Dredd and his rookie mutant psychic, Anderson, to the Mega Block, Peach Trees – a gigantic self-contained town where they discover the culprit. Hoping to take him back to the Hall of Justice for interrogation, the perpetrator’s boss, Ma-Ma, puts Peach Trees into lockdown, cutting it off from the outside world. Dredd and Anderson find themselves pitted against every resident of the block that believes they have a chance against them. Anderson’s Psi powers learn that Ma-Ma is responsible for the manufacture and distribution of the drug, Slo-Mo, a drug that slows the user’s perception of the passing of time. Here’s where 3D comes into play, the bullet time effect championed by the Matrix movies given a respectful nod. This effect works well for the most part, but there is an element of “grain” to these scenes. I’ll admit I’m a fan of long locked off establishing shots, of which there are plenty, allowing the eyes to roam around the shot, picking out the details. Unfortunately these scenes are too long, and the eye (perhaps ruined by too many quick cuts in recent years) finds itself returning to parts of the frame already explored – in essence, we’re left waiting for a cut. Saying this, I found myself drawn in by these scenes, as they are needed amid the frenetic activity – a well deserved catch-your-breath break. During Dredd and Anderson’s ascension no punch is pulled illustrating Dredd’s determined removal of the obstacles in their path. The Slo-Mo scenes (how can the camera suffer the effect of the drug?) of various “Judgements” are paced perfectly. You know that bullet’s going to hit right there, but when it does… In contrast, some of Anderson’s combat scenes are shown in real time – to devastating effect. But I found myself thinking the 3D effect should have been utilised for Anderson’s “Psi” scenes, rather than the focus pull.

Karl Urban’s portrayal of Dredd is faultless. The “grim chin” expression from the comic is perfectly translated, his voice, a mixture of Eastwood’s Harry Callahan and the original (remember that?) Boba Fett, his walk akin to Robocop at times. Urban has said he researched Dredd’s voice, finding a description in 2000A.D. as “a saw cutting through bone”. This is perfectly realised by Urban, a self confessed SF fan.

In comparison to Dredd of 2000A.D. it’s a bit of a mixed bag. Production design’s budget seemed to have been spent mostly on VW camper vans, concrete scree and fibreglass body panels for unrecognisable modern day cars and motorbikes. Mega City 1 isn’t that mega, more embryonic. There are a few plot/common sense problems – Dredd telling Anderson to conserve ammo, then a few scenes later shooting a security camera. Anderson’s gun (as per the comic) explodes when used by a perp, when it should have simply electrocuted the user allowing the gun to be picked up again by its Judge owner. The choice of some words is strange at times, and out of character – the CGI repetitive – the opening of Peach Trees identical to that of the lockdown, with the same lighting, time of day and camera move used. These issues aside, Dredd is a ride from start to finish, and I can only hope if there is a sequel, Urban remains and the city grows around him.
Posted by Stephen Theaker