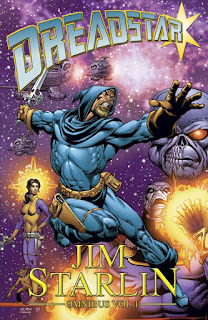 Dreadstar Omnibus, Vol. 1 by Jim Starlin (Dynamite Entertainment, ebook, 377pp) begins poorly, with a long recap of events that took place in the Marvel graphic novel Dreadstar (not included), as well as hinting at a bigger story that preceded it (explained more fully in chapter eight). Vanth Dreadstar is, as far as he knows, the sole survivor of the Milky Way, and arriving in the Empirical galaxy he did his best to ignore the two hundred year-old war between the Monarchy and the Instrumentality, found a wife, became a farmer, and lived a quiet life among peaceful cat-people until the Monarchy decided to wipe them out. His wife dead, Dreadstar decides there’s work be done, gathers a band of rebels, and that’s where we come in, ready to read twelve chapters originally published as the first twelve issues of Marvel’s ongoing Dreadstar.

It’s a shame that filling in that backstory takes up so much of the first chapter – when as I’ve shown above it could have been done rather more swiftly! – but that’s the last time the book could fairly be accused of moving slowly. It gets better with every page that follows, events moving at a breakneck pace. It’s much like the equally readable Star Wars and G.I. Joe comics Marvel were publishing at about the same time, but enhanced by the sense that these are the real stories of these characters, not just spin-offs. Our heroes are an interesting bunch – a cyber-psychic, a cat-man, a wizard and a rogue – but their leader, Dreadstar, is sometimes hard to like. For example, when he meets a vengeful survivor from the Milky Way, he fights him to the death, admittedly with good cause, but he doesn’t bother to explain that he didn’t destroy the Milky Way on purpose. He walks away from the fight happy to have vanquished evil, with little acknowledgment that he was in part responsible for its creation.

Dreadstar has a pair of good antagonists in the High Lord Papal, dog-collared dictator of the religious Instrumentality, and Z, scheming chief strategist for the Monarchy, whose appearance is so obviously inspired by Darth Vader it makes Dark Helmet look like an original creation. I don’t think that’s an awfully bad thing, though. The recent acquisition of Lucasfilm for $4bn made me reflect on how few attempts we see these days to copy Star Wars, and how much I’d like to see more. What was the last science fiction film to have anything of that feel? The Fifth Element, Firefly? Anyway, Starlin addresses this point with winning directness in chapter twelve, when we see four very familiar figures step out from the spaceship.

The artwork is clear and easy to follow, but with many clever touches, such as in chapter five, “The Commune”, where a long thin vertical panel down the right of the page is used to illustrate the brute Tuetun falling to his apparent death while cat-man Oedi moves on with his mission. Unusually, it’s well worth browsing the book’s pages in thumbnail mode to get a sense of how varied its use of panel structures is, always to serve the interests of the story. Originally writing in 2003, Walt Simonson in his introduction identifies the panel layouts as one of the things that makes Dreadstar feel very much of the eighties, but it’s a style that will win the comic new friends now, as the double page splashes and irregular panels of the last twenty years begin to feel like relics of another age. Nothing suits guided view better than rectangular panels. It’s worth noting also that the artwork, although not completely recoloured, has been scanned and retouched from the original film, so the colours are bright and unmarred by the vagaries of actual printing.

Dreadstar isn’t an entirely grown-up comic in tone and characterisation; more a typical comic of its time with a few touches of adult subject matter. In that sense it might suffer in comparison with, say, a modern comic like Saga, which in many ways is very similar, with its ongoing war between two great, unsympathetic empires and a small band caught in the middle. But then Starlin produced these comics at a time when the adult readership of comics wasn’t as well established as it is now. In some ways, it has the beating of more recent comics, in particular with regard to the density of its storytelling. Each chapter of this would take up at least a trade paperback of most modern comics. Even in just this first volume, major story arcs – things I took to be part of the comic’s ongoing premise – come to unexpectedly early conclusions.

That’s left me very curious as to where the comic will go next, and I could quite happily have read another twenty or thirty issues of this before moving on to something else; I’ll be sure to buy them as they appear on Comixology. The book is recommended to anyone with a taste for space opera and Marvel comics from the same period. Don’t expect too much from it and you should be able to pass a few enjoyable hours in its company.
Posted by Stephen Theaker