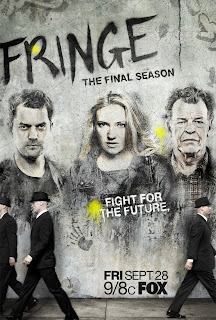 Fringe, Season 5 (Sky 1/Fox). Now that it’s over, like sister show Alias just five years into its run, Fringe (in which a special division of the FBI investigates crimes, deaths and other incidents with a weird science element) must be seen as a decent programme that despite many fine moments never quite caught fire, never blossomed into more than the sum of its parts, never became the programme you wait all week to watch. Part of the problem was that the romance between its lead characters never quite convinced. Much as you wanted them to be happy, it was never clear why they wanted to be happy together. It wasn’t down to the actors (Anna Torv and Joshua Jackson): Peter Bishop’s relationship with the alternate, naughty, smiling Olivia Dunham from another dimension had all the spark the usual couple lacked.

In reviewing the first few episodes of the programme I noted how much it resembled a modern-day take on William Hartnell’s period of Doctor Who, with irascible, addled genius Walter Bishop (John Noble) as the Doctor, Peter and Olivia as Ian and Barbara, and Astrid (Jasika Nicole) as Susan. The resemblance between the programmes grew as season three’s plot drew Age of Ghosts/Doomsday out to twenty-two episodes, and season five in its turn bears distinct echoes of Last of the Time Lords and A Good Man Goes to War, with Earth under a paradoxical invasion from the future, and the companions acquiring an adult daughter. If a sixth series had followed it would presumably have been about a new group of Observers stealing Earth from our solar system and a new Walter being cloned from the bits of his brain he usually keeps in a jar.

And one could easily imagine a sixth season, that being part of the reason this fifth season disappoints. With this planned as a final, short series you might have expected it to be packed with plot, betting everything on a final roll of the dice, but that’s not how it feels. The ongoing storylines about Olivia’s peculiar powers, Peter’s parentage, Walter and Belly’s science secrets and the war with the alternate universe were all more or less resolved in previous years. That leaves the Observer storyline: who are the strange, hairless men who turn up to watch at times of crisis, and what are their goals?

In season four we had a brief glimpse of a future ruled by them, and season five picks up that story, our heroes freed from amber and joining the resistance. Unfortunately, under prolonged examination this future is barely distinguishable from the world of The Adjustment Bureau, and the heroes spend the entire season on a drawn-out treasure hunt prompted by video cassettes carved out one by one from Walter’s ambered laboratory. The season’s arc is basically that Walter has forgotten the plan. At first I saw this as a quirky reflection on his character, but as it went on and on it seemed ever more contrived, especially when the amber itself presented a much more obvious way of achieving their goals (I won’t explain more to avoid spoilers).

The modular nature of Bad Robot television like Alias, Lost and Fringe, with each season establishing a new status quo, does much to keep them fresh, and I like that about them, but Fringe could as easily have finished after any of its other seasons, and another season could easily have followed this one. That seems unsatisfying. It was always impeccably produced, the special effects always gorgeous, the actors perfectly cast. I enjoyed watching it. If it had ended after season one I doubt we would have found anything better to watch instead (we would probably have settled for Warehouse 13). I will miss it, and even now I think it had the potential to be one of the greats. If it didn’t quite get there, at least it never stopped trying.
Posted by Stephen Theaker