A Conspiracy of Alchemists by Liesel Schwarz – reviewed by Stephen Theaker 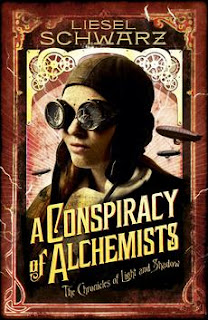 A Conspiracy of Alchemists by Liesel Schwarz (Del Rey, hb, 384pp) is essentially teenage urban fantasy with a light drizzle of steampunk. The heroine’s father has been kidnapped by scoundrels, seemingly in connection with a courier job of hers that went south. She is Miss Elle Chance, a nerveless but youthful airship pilot in an altered, magical 1903, and the story wastes no time in throwing her into the arms of Marsh, a warlock also known as Lord Greychester, for a jaunt across Europe. They are searching for her father, of course, and also hope to thwart the ambitions of a gaggle of uppity alchemists looking to upset the balance between the worlds of shadow and light, but that all amounts to little more than background colour: the trip’s narrative purpose is to accelerate the relationship of Marsh and Elle, keeping them in close company, forced to endure each other through trains, hotels and restaurants until the rose of romance blossoms among the thorns of mutual dislike.

It’s fair to acknowledge that the book seems to be written for a readership half or perhaps even (unwelcome as it is to admit) a third the age of this reviewer, though this isn’t apparent from its packaging. Its moves are predictable, but worn-out as I am, I’m not yet entirely tired of watching people fall in love, and at the book’s best it comes close to the breathless charm it pursues. That our sparky girl pilot will fall for the sexist who purses his lips in such a beautiful way is never in doubt. At first she’s all, “I’d rather eat my own foot than marry a man like you”, but even before the conversation is over his “animalistic, almost predatory” ways are making “little tremors sift through her”. Later she does “her best to ignore the strange quickening she felt in her chest when he smiled at her” and his look sends “a ripple of apprehension through her, right to the tips of her fingers”.

It’s all intended to be very romantic, and it would be a lie to say my heart was not at times stirred, but he’s not the kind of guy you’d want your daughter to show an interest in, with his rather rapey tendency to declare that “I can’t be held responsible for what I might do next”, his eyes “dark with desire”, if she doesn’t leave him to his brooding. There’s an irony in Elle’s rather ageist and selfish response to meeting one of his former lovers: “The old crone was jealous, Elle realised. It was very creepy to behold.” It isn’t half as creepy to behold as her own romance with this long-lived Lord Darcy wannabe, and comments like that give the book a slightly unexamined, naive feel.

Certainly don’t buy this book for its science fiction or steampunk elements. The goggles on the cover are not misleading – there is a gyrocopter ride, albeit one revealed later to be less than entirely steam-driven – but they highlight a minor aspect of quite a conventional romantic novel. Like Twilight (the film, at least; I haven’t read the book), it’s essentially a series of long, soulful conversations between star-crossed lovers, and at times – usually when there was a bit of action and fighting, and before the verbal sparring went on a little too long – I quite enjoyed it. But it was a book I read to the end because I don’t like to leave books unfinished, not because I thought anything unmissable was going to happen.
Posted by Stephen Theaker