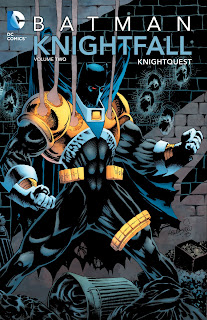 Batman: Knightfall, Vol. 2: Knightquest (DC Comics, tpb, 656pp) picks up the story from, naturally, Knightfall Volume 1, though many readers may (like me) have read those same stories in the older Knightfall collections Broken Bat and Who Rules the Night. They left Bruce Wayne nursing a very bad back and Robin wondering whether he can trust the new guy in the batsuit (well, a batsuit, one that only ever looks good when it’s in full shadow): Jean Paul Valley, former knight of Saint Dumas and vanquisher of Bane. He’s a brutal fighter rather than a detective, violent, unpleasant and at times repulsive (his inner monologue when meeting Catwoman is stomach-churning), and has little time for Robin or Wayne Manor, bricking up the entrances to the Batcave. Not a fan of the Batmobile, he prefers the cool but impractical subway Bat-rocket.

Unlike the roughly contemporaneous introductions of Kyle Rayner as Green Lantern and Connor Hawke as Green Arrow, there was clearly never any intention of Jean Paul Valley being Batman for anything more than a short period, and so these stories see talented writers and artists (including Chuck Dixon, Alan Grant, Jo Duffy and Barry Kitson) marking time until the real Batman returns. Typically silly multi-issue stories feature a punk rock Three Stooges and a film producer funding the Joker’s directorial debut: a film about killing Batman. We don’t get to see the miraculous healing of Bruce’s back, surely the most significant event of this period, nor do we ever really see why Valley would want to be Batman; he doesn’t like the costume, the methods, the city or the colleagues that come with the job.

The entire book feels like an extended raspberry to the comics fans of that period: you wanted Batman to be tougher on criminals, to wear more armour, to be more in line with other nineties characters? Well, here you go, and it’s crap, isn’t it? They don’t even have the guts to let the bad Batman be really bad. Assuming no one ever gets seriously hurt in all the car crashes he causes, his worst crime is (while in the midst of a pseudo-schizophrenic episode – he’s plagued by hilarious visions of his dad and Saint Dumas) to not save Abattoir, a mass murderer, from falling to his death, which also results in the death of a man Abattoir had kidnapped and hidden away in a death-trap.

Bruce Wayne doesn’t see any of this happen, but it motivates him into coming back angrily to reclaim his cape (which he manages in book three, before immediately giving it away again!). He seems to be perfectly happy in retirement up until then. This book doesn’t give us a heroically broken Bruce Wayne, but instead a feckless idiot who handed over his Batcave to a maniac, with the kind of due diligence you’d expect from his public playboy persona. In fairness to Bruce, this view of him may be unfairly shaded by this collection skipping over his adventures in Knightquest: The Search, a storyline which ran in Justice League Task Force, Shadow of the Bat and Legends of the Dark Knight.

The book’s a disappointment from start to finish. Its final ignominy comes in the introduction to Volume 3, whose writer gets important details wrong: they clearly couldn’t be bothered to read this. The format is a good one, though: hundreds of pages, well-bound, bright printing, a nice open spine. The Essentials and Showcases were brilliant in their day (I must have fifty or more of them), but the lack of colour hangs heavy upon them now that we can buy digital comics in colour just as cheaply. I hope this becomes the default format for archive material in paperback; I’m sure it will be used to reprint better material than this.

Comparing this collection to Grant Morrison’s Batman and Robin shows just how poorly this book exploits the storytelling potential of a new Batman. Comparing it (and its two companion volumes) to Christopher Nolan’s magnificent, blistering The Dark Knight Rises serves as the best possible illustration of the adage that bad books make great films.
Posted by Stephen Theaker