Deliver Us from Evil, reviewed by Douglas J. Ogurek 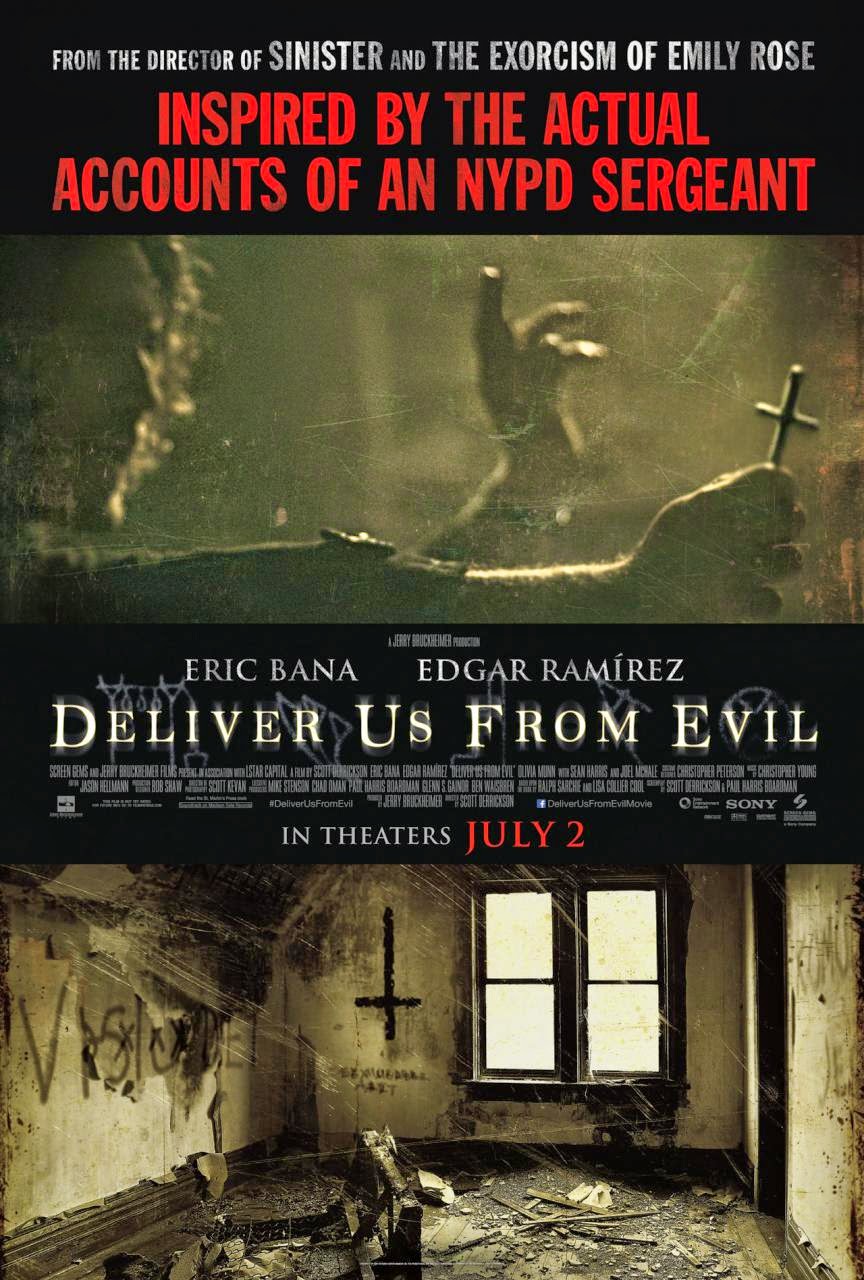 A mysterious hooded figure hanging out at a zoo coaxes a woman into attempting to kill her child. So begins an investigation that will call into question Bronx cop Ralph Sarchie’s (Eric Bana) faith (or lack thereof) and sanity.

Deliver Us from Evil (2014), directed by Scott Derrickson, adds a police procedural twist to levitate the film to above par status in the overdone demonic possession subgenre. During Sarchie’s journey, the viewer encounters a horde of proven scare tactics: disturbing video footage, creepy wall text and symbols, basement explorations, toys moving on their own, faces and bodies popping onto the screen, and sinister noises.

Sarchie begins to link the zoo incident footage (which calls to mind M. Night Shyamalan’s The Happening (2008)) to three Iraq War veterans. As Sarchie navigates “the sewer” of his precinct, his findings take a toll. His relationship with his wife and child worsens. He starts to see and hear things that others cannot. An event from his past begins to surface. Then there is the more immediate threat of the hooded figure, who grows more dangerous as Sarchie gets closer to the truth.

Eric Bana, known to many as “the first Hulk” (Hulk, 2003), proves a wise casting choice. He offers a hardened cop with a believable lack of introspection. Sarchie’s raw protestations against the supernatural add a bit of humor. I’m paraphrasing here: “I hate it when people blame little fairies for all the bad shit they do,” or “She didn’t try to kill her kid because she’s possessed. She tried to kill her kid because she’s fuckin’ crazy.” The concerned expression that Bana has perfected and his New York accent are bonuses.

Funny man Joel McHale of the TV series Community plays Sarchie’s wise-cracking sidekick Butler. He’s the type of guy who wears a Boston Red Sox hat in Yankees territory to see how people will react. One would expect a little more depth from him.

Possessed by Possession Tropes
There really isn’t anything groundbreaking about Deliver Us from Evil. Still, like a slew of other recent horror films, especially James Wan films like Insidious (2010) and The Conjuring (2013), it effectively packages horror film tropes. I was engaged throughout.

One of Deliver Us from Evil’s greatest strengths is its use of sound. For instance, there are times when Sarchie’s flashlight searches—remember, he’s a cop so there’s a justification for doing so—go silent to ratchet up the tension. Additionally, a leitmotif of static and children’s laughter builds and connects with an incident from Sarchie’s past.

An invisible entity likes to make noises in Sarchie’s daughter’s room. Though they are not adequately explained, the loud scratching and her toy owl’s unprompted “haha hoo haha hoo” are admirably nerve-racking. And no matter how many times we hear it, the “Pop Goes the Weasel” song that accompanies the jack-in-the-box continues to build tension.

The inevitable exorcism in this film is theatrical and a bit lengthy, yet entertaining in a “how far will they take this?” kind of way. There’s even humor: a cop, viewing the event through one-way glass, occasionally makes overly dramatic comments rife with profanity.

Deliver Us from Evil gives a fix to horror aficionados, but they will find its scares short-lived. So continues the quest to outdo the abiding terror that Paranormal Activity brought in 2007. – Douglas J. Ogurek
Posted by Douglas J. Ogurek