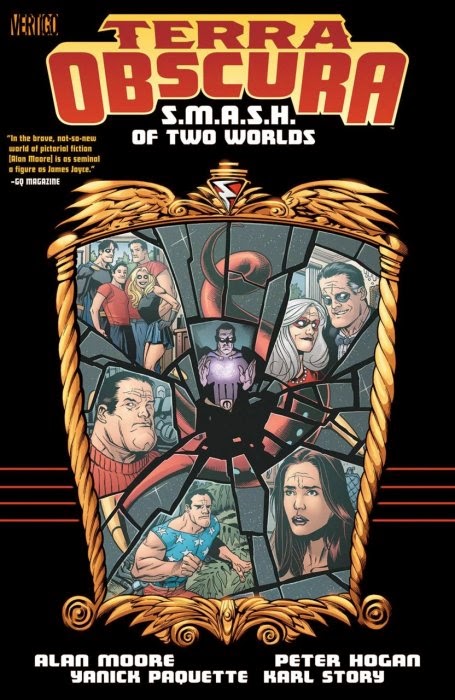 Terra Obscura: S.M.A.S.H. of Two Worlds (Vertigo, tpb, 336pp), written by Peter Hogan, collects two mini-series set on Earth, though not our Earth, nor the Earth of Tom Strong, although he has visited. He dubbed this Terra Obscura. It mimics his home in many ways, and provides a home to super-heroes from the forties who have fallen out of copyright and trade mark protection, like the atomic-powered American Crusader, The Liberator, The Woman in Red, The Green Ghost and the Scarab.

Some of these characters were familiar to me from the use to which other publishers have put them, for example Project Superpowers, supervised by Alex Ross, which gave the characters their own comics universe to inhabit. That was a more serious, epic book in the vein of Kingdom Come, but this pulpier take was fun too. These stories focus mainly on Carol, the daughter of the Fighting Yank, frustrated by the loss of her powers since her father’s death, and Ms Masque, who had no powers in the first place.

The first story picks up some time after Tom Strong’s most recent visit. A field which nullifies electrical devices is expanding from a canyon near Vegas, with refugees pouring out of the zone “babbling nonsense about monsters and demons”. Surviving members of S.M.A.S.H. (the Society of Major American Science Heroes) are sent to investigate. In the second story timeslips are being caused across the world by the return of long-lost hero Captain Future and his bizarrely distorted spaceship.

The background to both stories is the rising influence of the Terror: a dead Batman survived by a potentially malign copy of his intelligence and a half-mad Robin.

The artwork by Yanick Paquette is bold and attractive throughout – maybe too much so in some distractingly cheesecakey panels! – and the colours are a treat. A clever feature of Tom Strong is the way letterer Todd Klein makes Strong’s dialogue a bit bigger than everyone else’s, subtly enhancing his heroic aura, a trick repeated here for Tom Strange. If I were a comics artist, this would be a dream assignment: cool stuff happens on every page. This art team makes it look every bit as cool as it should.

Peter Hogan’s foreword explains how DC declined to publish the first mini-series unless Alan Moore was involved, but Hogan wrote the actual scripts, and I’m much keener now to read the two Tom Strong mini-series he has written. This book clearly sets up future series that did not materialise, but the stories stand well enough alone that this doesn’t spoil things. This may not be the very best work pubished in the America’s Best Comics setting, but it’s a good chunky read, in page count and story content, and it was a very pleasant way to spend an afternoon.
Posted by Stephen Theaker