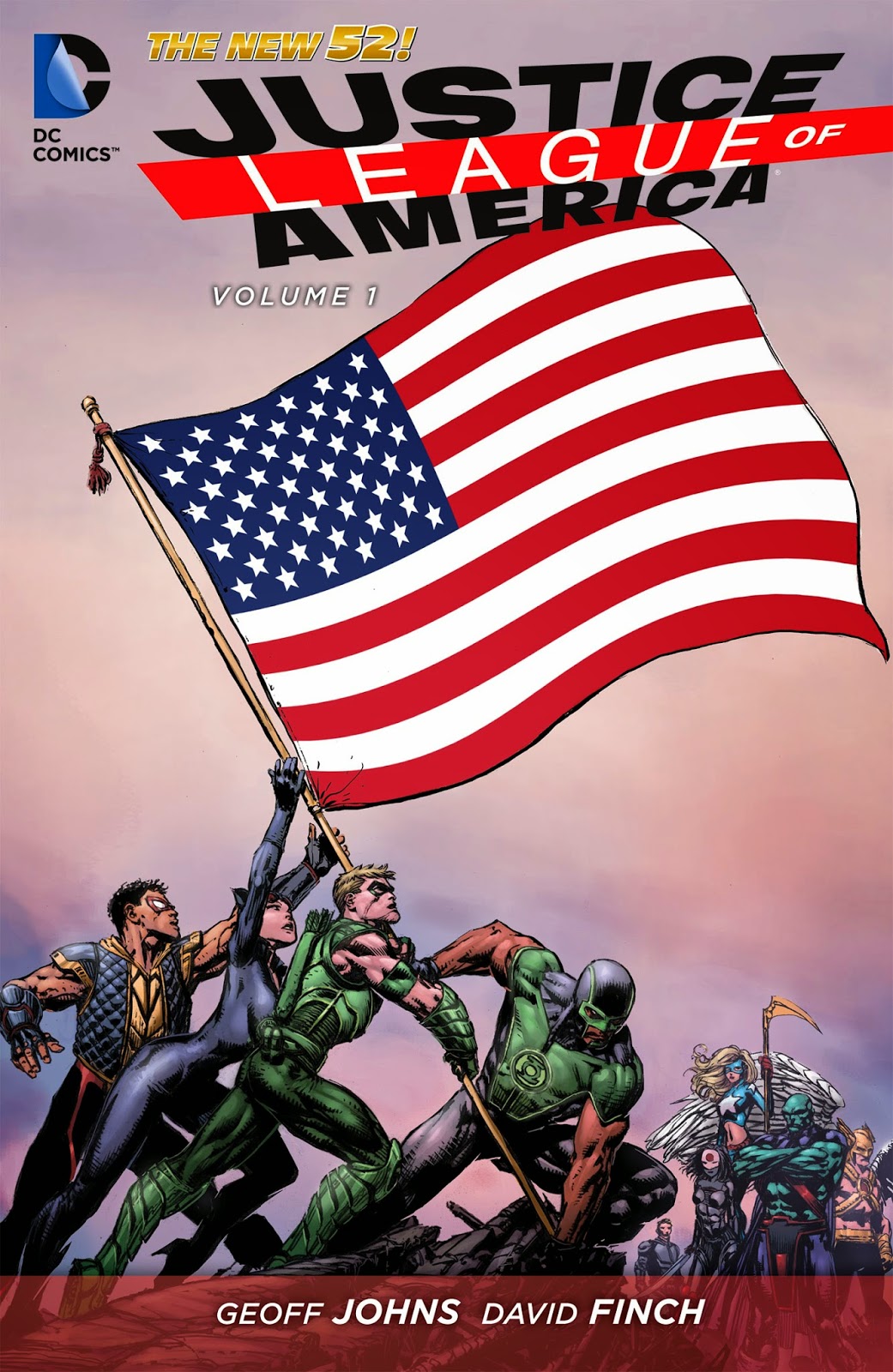 Justice League of America, Vol. 1 (DC Comics, tpb, 192pp) is mostly written by Geoff Johns, with most art by David Finch. It presents us with an all-new JLA B-team in the post-Flashpoint DC Universe, where, on the evidence of this book at least, continuity has quickly become as knotty as it was in the old one. The team is led by Steve Trevor, apparently fresh from romantic disentanglement with Wonder Woman, and also features Green Arrow, Katana, Vibe, Martian Manhunter, Stargirl, Hawkman, a ludicrously undressed Catwoman and a new (to me) Green Lantern.

Aside from Grant Morrison’s batbooks (which seem to pretty much ignore the universal continuity change) and the first few issues of Justice League Dark, I haven’t read much of the New 52, but it was easy enough to jump in. Green Arrow hasn’t grown his beard yet, the Martian Manhunter isn’t munching on Oreo cookies, and it seems that Hawkman hasn’t yet found his Hawkgirl, but most comic readers, even those who no longer read them month to month, are so used to alternate worlds and elseworlds and what-ifs that a whole new universe doesn’t take much getting used to.

The biggest surprise here, given that the introduction of the New 52 was the point at which DC went day-and-date digital, is that absolutely no consideration has been given in the comic to making it suitable for reading in digital formats, with double-page spreads used as enthusiastically as ever. No one expects every comic to be arranged in nine-panel grids like the Baxter format Legion of Super-Heroes, but that’d be a lot easier to read in guided view than any of this.

This review is based on an pre-release pdf, so the final edition may have changed to some extent, but this book is rather a mess. It begins reasonably enough with a story of the new Justice League of substitute heroes being formed by Amanda Waller (who has lost a lot of weight since the last time I saw her) and Steve Trevor, and then going on their first adventure: fighting Professor Ivo’s android versions of the real Justice League.

It’s not very good, but at least I understood what was going on. Then we seem to be thrown into the back end of a crossover, with some crucial events skipped over, and I was reminded why I don’t read many DC Comics these days. The next chapter is something called Trinity War Chapter Four with no information about the content of chapters one to three – and then that story will be continued in Justice League Dark!

A missed opportunity. Digital comics encourage asynchronous reading – people now, more than ever, will plough through an individual series rather than reading several comics that happen to be out in a particular month. On this showing, DC are still so focused on monthly sales, on crossovers and events, that the comics are hobbled. There was a glimmer of something good here, and these are characters I like and have been reading for thirty years, but I didn’t enjoy this enough to want to read volume two.
Posted by Stephen Theaker