The Winds of Gath by E.C. Tubb (audiobook), reviewed by Stephen Theaker 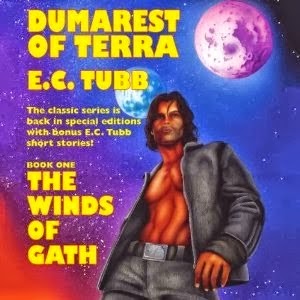 The Winds of Gath (4 hrs 55, Wildside Press, Audible edition) is the first book in the long-running Dumarest Saga by E.C. Tubb. This is a new audio version produced by Wildside Press, and read by Rish Outfield. It could, however, have been book six or seven just as easily, since when we join Dumarest for this first time he is already an adult, already searching for Earth, already tested by circumstance and hardened by experience. This first novel is the most derivative of those I’ve read – it copies Dune very closely, with its own Bene Gesserit (the Matriarchs of Kund), mentats (the Cybers), a duel with a beautifully sculpted muscle man, a bedroom encounter with a flying assassin, etc. But it’s much shorter than Dune, much less portentous, and subsequent volumes do head off in new directions.

Elements that seemed dated and sexist reading an old paperback are even more striking when appearing in a new audiobook: “Dyne had his cold predictions, based on known data and logical extrapolation, but she had better than that. She had the age-old intuition of her sex, which could confound all logic.” E.C. Tubb writes men well, women less so. A lonely, dangerous brooder who is good at violence but tries to avoid it, Dumarest is worshipped and feared by men, irresistible to women. He’s not far away from being the hero of a romance novel, though here he once again suffers the indignity of an unflattering cover portrait, albeit one not quite as bad as those that (dis)graced the Arrow paperbacks.

It took me a little while to get used to the American narration, by Rish Outfield – I’d always imagined these stories being told in the voice of a stern English headmaster! – but these books were I think originally written for the US market, so it makes some sense. There are a number of long conversations in the book, and Outfield handles the range of characters required very well. The simpering of Seena at the beginning may be a barrier for some listeners, but it’s fair to say that Outfield’s performance fairly reflects the book’s portrayal of her as rather a ninny. The audio production seems a bit inconsistent, as if the reader changes position between chapters, or parts were recorded in different studios, but that doesn’t spoil it: I only read this book a couple of years ago, and listening to it again so soon on audio was still a pleasure.
Posted by Stephen Theaker