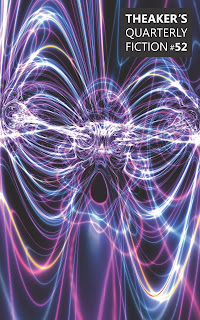 Theaker’s Quarterly Fiction #52 is a little shorter than usual, but still features four great stories: Rocking Horse Traffic by Yarrow Paisley, Quest for Lost Beauty by Howard Phillips, Zom-Boyz Have All the Luck by Len Saculla, and “Surprise Thee Ranging With Thy Peers”, the latest Two Husbands episode from Walt Brunston. The Quarterly Review from Douglas J. Ogurek, Stephen Theaker and Jacob Edwards includes reviews of It Follows, Avengers: Age of Ultron, Insurgent, Memory Lane, Jurassic World, Holy Cow by David Duchovny, The Dark Defiles by Richard Morgan, The Glorkian Warrior Eats Adventure Pie by James Kochalka, and many others.

Howard Phillips is a dissolute poet whose previous contribution to this zine received such bad reviews that he wept for three days, burned seventeen unpublished novels, and wrote a series of angry blog posts accusing various parties of disparaging his genius. We asked him why he had taken it so badly, and he replied, “If you need to ask, you’ll never know.”

Jacob Edwards flies with Australia’s speculative fiction flagship Andromeda Spaceways Inflight Magazine, but meets us in the pub between runs. This writer, poet and recovering lexiphanicist’s website is at http://www.jacobedwards.id.au. He also has a Facebook page at http://www.facebook.com/JacobEdwardsWriter, where he posts poems and the occasional oddity. Like him and follow him!

Len Saculla has had stories and poems published in venues such as the BFS publication Dark Horizons, Terry Grimwood’s Wordland and Ian Hunter’s Unspoken Water. He has also had a couple of stories turned into podcasts from Joanna Sterling’s “Tube Flash at the Casket” (http://www.thecasket.com).

Yarrow Paisley lives in the Pioneer Valley of Western Massachusetts, USA. His fiction has appeared in Shimmer, Strange Tales V (Tartarus Press), Sein und Werden, and Dadaoism: An Anthology (Chômu Press), among others.