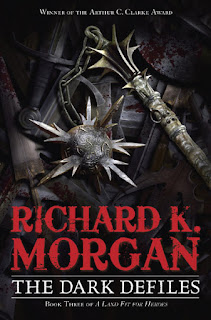 The blood wells, the ink heralds.

Richard Morgan seemed to spend most of The Steel Remains, the first book of his A Land Fit For Heroes trilogy, coming to terms with his own dark take on the fantasy genre. The ending was abrupt (almost like walking off a cliff), and it took him much of the second book, The Cold Commands, to prod and coerce his protagonists back into the story. These characters, however, were always the key, and having made his name writing holistic and gritty science fiction, Morgan, from the moment he embarked upon his disquieting march across genre boundaries, clearly wasn’t going to start faffing about with bog-standard wizards and warriors, chalices and chosen ones; nor, for that matter, join-the-dot quest narratives, rainbow character arcs or pre-industrial paradises threatened by long-dormant evil forces now risen. The setting would be, as the umbrella title suggested, one calling out for heroes, but those heroes in turn would be the tarnished product of their environment. By nature of his approach, Morgan implicitly promised (then explicitly delivered) the sort of unsettling realism that sees shires ransacked and Hobbits crushed dead underfoot. The result is urgent, forceful, unromantic, unforgettable – including graphic, present tense flashbacks to defining acts in the protagonists’ lives, some of them sexual and uncensored, brazenly confronting – yet, by spurning escapism and the lazy warm glow of the happily ever after, could Morgan, for all his exertions and for all that his titles play coy with noun/verb ambiguity, ever have thought to leave us with fantasy sutras as satisfying as they are compelling? The answer, of course, lies in the trilogy’s concluding book, The Dark Defiles (Gollancz, 549pp).

Morgan’s brand of high fantasy differs from the historically popular model in several key aspects, the most pervasive of which is a grimness of setting; the stark refusal to glamorise a world in which the overwhelming majority of the population is poor, miserable, vulnerable and without prospect. A Land Fit for Heroes is not, in short, a place that right-minded readers would wish themselves into, not even (or perhaps especially not) as the heroes in question. Morgan’s main characters – Ringil, an outcast homosexual swordsman; Archeth, an immortal drug addict orphaned of her alien heritage; and Egar, an aging nomad and onetime dragon-slayer too restless to settle – have their own codes to live by, certainly, but they are more self-serving than altruistic or noble; as much as their particular natures have inured them to the heroism (such that it is) of railing against life’s misfortunes and limitations, their dogged struggle for self-determinism rarely appears more than a rearguard action. As The Dark Defiles builds towards its conclusion, the plot doesn’t so much resolve as clear sufficiently to at last reveal something of Morgan’s grand purpose for the trilogy: seemingly, to undermine the tradition, to question the very concept, of an externally mandated quest. Yes, Ringil, Egar and Archeth are on a quest (or, more accurately, three quests with considerable overlap), but the defining difference is that they are not instruments of some greater need; rather, the course of events is shaped by their needs. They are not recruited to the quest; they generate its existence. Morgan’s crowning accomplishment, then, is to leave his players unaware that they are part of any great undertaking, while slyly inculcating in the reader an appreciation that fantasy is, ultimately and at its best, about the intricacies of who, and that where and why, and what and how and when, are merely tributaries and run-off in an ever-refining, ever-defining cycle of identity.

With The Steel Remains having broken new ground as an audacious if incomplete challenge to genre platitudes, and The Cold Commands then coming on again as unremitting and unflinching, near enough self-contained, a high-water mark, The Dark Defiles remains faithful to Richard Morgan’s rose-thorn-scratched not rose-tinted ethos; inaccessible, perhaps, without the preceding books, but cleverly resolved and feeding synergy back into the mix, allowing the trilogy to reach a most apposite, far from inevitable conclusion. If Tolkien laboured over every detail, every where, why, what, how and when of Lord of the Rings, Morgan has sweated blood on the who of A Land Fit for Heroes. In the perfect world he so emphatically disavows, this would see him take pride of place for the next fifty-plus years. As it is – well, chances are he’ll just have to suck it up and keep on doing what he does. But such is the way of heroes.
Posted by Stephen Theaker