Apologies for neglecting you, dear readers!

Sorry that it has been so quiet on here of late, and that Theaker’s 52 is so tardy. It’ll finally be out this Friday – honestly, it will, the blog post is written and the files are all with Amazon for approval! – though I’m afraid you’ll have to wait till issue 53 for the next instalments from Mitch Edgeworth and Antonella Coriander’s science fiction sagas, both bumped with great regret from this issue because I ran out of time to proofread them. They’ll be worth the wait, I promise. 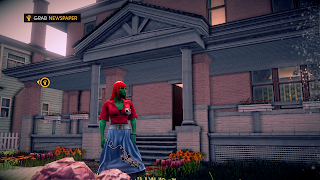 The main reason I’ve been so pressed for time has been that my freelance work has been going remarkably well (and my co-editor John has been even busier than me with work), though late night sessions of the lovably reprehensible Saints Row IV: Re-Elected have played a tiny part too, and the end of the summer term meant a whirlwind of end-of-year shows and awards nights and governors’ meetings. (Our oldest daughter even appeared in a play at The Rep, playing Angry Teacher No. 2!) I spoke successfully in favour of a school planning permission application at the city council, which was a fascinating experience – and will lead to the local children getting a brilliant new sports hall. I’ve also been running the British Fantasy Awards, which are currently in a busy phase. The nominees have been announced and I’ve been arranging for the jurors to be supplied with reading copies.

Not many of my reviews have appeared on the TQF blog this year, but I’ve kept up with writing reviews for Interzone. I looked at The Very Best of Kate Elliott in #257, The Galaxy Game by Karen Lord and The Whispering Swarm by Michael Moorcock in #258, and The Great Bazaar and Brayan’s Gold by Peter Brett in #259. If all goes according to plan my review of Armada by Ernest Cline will be in #260. It’s a privilege to appear in those pages. It can sometimes be quite a challenge to write eight hundred words about a novel while avoiding spoilers and grand claims, especially for an author I haven’t read before, but it’s a challenge I enjoy. 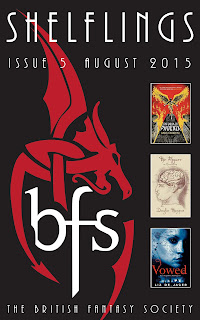 My mistake has been to aim for a similar style with my TQF reviews, when there’s a limit to how often I can spend a whole day or so working on a review. But I have begin to write new reviews for TQF as well, and the fruits of that should begin to appear in issue 53, for which I have twenty or thirty reviews lined up. They are a bit shorter than my reviews have been of late, and written in a looser style, more quickly, but I’m quite happy with how they’ve turned out. I’ve created a neat little Google form for inputting the reviews, and some clever functions in the responses spreadsheet that organise the reviews into sections and alphabetical order and add all the typesetting coding required, meaning the TQF review section will take about ten minutes to typeset from now on.

I realised that the same techniques could also be applied to the irregularly produced ezine I compile for the BFS from the reviews that have already appeared on its website, and so Shelflings #5 emerged at the beginning of this month after a long time away, like Rip van Winkle emerging from a cave! For the BFS I’ve also worked out a nifty way of sending out renewal notices and new member welcome letters, building them into the production of our brilliant monthly members-only bulletin, which with luck will save our membership secretaries a good deal of work. If you’re not a member of the BFS, join now so that we can enter this new golden age together!

Anyway, that’s all my excuses for now. Come back tomorrow for the world's first good review of *Pixels*! And on Friday for issue 52!
Posted by Stephen Theaker