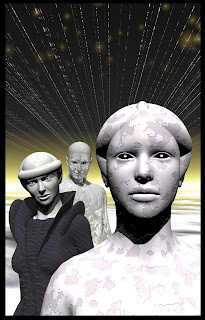 This is going to be our first themed issue in a long, long while. We are looking for stories inspired by this art by Howard Watts, which will be the cover art for issue 54, guest edited by Howard! Here are his guidelines for this themed issue:

"What’s going on with these three characters? Their fate lies in your hands! TQF is looking for short stories based on this image, to appear in issue 54, guest edited by me, Howard Watts. Normal TQF guidelines will apply, but I’m looking for strong character, conflict and ultimately plot – a completely developed idea, with a resolution."


As a bonus, an online poll will then ask the readership to decide the most popular story addressing the theme, and the author of that story will receive a year’s subscription to TQF (or a cash equivalent if outside the UK), plus a large jpeg version of the art, with a white border with their story title beneath it – suitable for framing by one of the many high street photographic shops or online art sites, such as Snapfish.