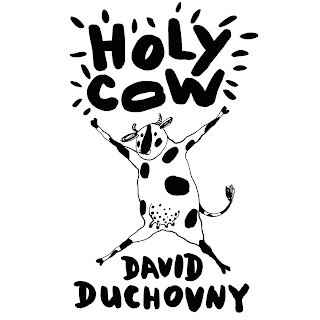 Holy Cow (Macmillan Audio; Audible edition) by David Duchovny. Subtitled a modern-day dairy tale, Holy Cow is the story of Elsie, a cow who discovers the grim fate awaiting her kind in the slaughterhouse. With Shalom the pig and Tom the turkey she makes a break for it. Animals can talk to each other through grunts, whistles, barks and squeals, “a kind of universal beastly Esperanto”, which will come in handy as they travel the world. Elsie hopes to reach India, where cows are revered. Shalom dreams of Israel, where no one eats pork, and he’s already using Yiddish words and phrases and planning his circumcision. Tom is heading for Turkey, but his real dream is to fly.

It’s a short book, lasting just three hours, broken up into forty-eight chapters. Duchovny reads the audiobook himself, and is much more laid-back than fans of Californication might have expected – it’s friendly and conversational, rather than intense and tortured. That’s not to say he isn’t talking about some big stuff: our treatment of animals, religion, strife in the Middle East. He makes some pretty good points, but the message never overwhelms the charm. I wasn’t a fan of the script-like dialogue style, especially early on – it may have looked economical on the printed page, but slows down the audiobook with its repetition – and yet, overall, this is much better than people might have expected.

My favourite character enters the book late on, a camel, a former model, his fame from cigarette advertising appearances now faded, who misses the adulation that once irritated him so much, and feels guilty about having encouraged people to smoke. ***
Posted by Stephen Theaker