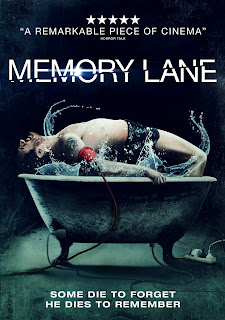 Just when is it safe to go back in the water?

Returning to his home town, troubled young Afghan war veteran Nick Boxer (Michael Guy Allen) finds solace in the love of the inscrutable Kayla M (Meg Braden), a girl with whom he feels an immediate, palpable connection. When Kayla commits suicide, Nick tries to do the same by electrocuting himself, but in the seconds between dying and being revived finds himself re-experiencing moments of their relationship and picking up details he missed when he was alive. Convinced there is more to Kayla’s death than first appears, Nick, with the help of close friends Elliot (Julian Curi) and Ben (Zac Snyder), sets out to kill himself again, zapping his consciousness down memory lane as he tries first to understand, then to alter, the past.

Memory Lane (dir. Shawn Holmes) has been likened to Christopher Nolan’s Memento, an apt comparison insofar as each employs a non-linear plot to explore themes of narrative veracity, grief, memory and perception. Both films were made on relatively low budgets, both are cleverly scripted and both display artfulness not for the cheap thrill of deception but rather for the sake of good story-telling. Yet, whereas Memento remains perfectly executed right to the end, Memory Lane stumbles at the final hurdle and so must forfeit its standing ovation and receive only with some caveats the garland of critical acclaim. The subtleties of the story are rendered with a deft touch – particularly the overlap between Nick’s mental state post-war and his retroactive acuity while dead – but the denouement feels rushed, and while everything makes sense (air quotes) the reveal does not inspire the audience to an epiphanic fathoming so much as a slow-nodding, piecing-it-all-together sort of reconcilement after the fact.

Memory Lane in this respect bears some resemblance to Shane Carruth’s Primer, which made a beguilingly naturalistic foray into time travel paradoxes only to fall on the sword of expository narrative voiceover some fifteen minutes short of feature film length. Both movies evidence the best aspects of independent filmmaking: a clear focus on story over spectacle; relatively unknown actors bringing their (considerable) talents to bear unencumbered by preconceptions; dialogue as it would occur in life, not just words intended solely for the viewer and near enough flashed up as intertitles while the characters choke on schmaltz; in short, the cohesiveness that comes from having one person in charge from the outset, pursuing a distinct editorial vision. As it happens, both movies also fail to stick the landing, but so be it. Memory Lane is only sixty-eight minutes long (perhaps it was made with film festivals in mind) and for all that Holmes and co-writer Hari Sathappan concentrated on proofing their script against extraneous material, it’s hard not to think they were somewhat more attuned to their own knowledge of the story than how an outsider might perceive it. That doesn’t mean the end product is not well worth watching, or that up-and-coming auteurs like Holmes don’t deserve awards for kicking down the doors of an industry so corporately skewed it would rather spend $73 million making Battlefield Earth than give new writer-directors the time of day. It just means there’s even better to come.

To praise any film relative to its funding or that of other productions must surely do it a disservice – Memory Lane requires no special consideration to secure its recommendation – but in this instance the figures demand mention, if only because they will seem hard to credit. Memento started life with a budget of $4.5 million. Primer was brought to the screen for only $7,000. Memory Lane cost about $300. It was made (in the sense of remuneration, not skills deployed) as an amateur production: a labour of love. Yet, the core idea and its realisation belie the lack of finances, and either the script was written with certain actors in mind or Holmes has the Midas touch in casting unknowns to fit each part. The cinematography is not always slick (Holmes took responsibility for everything himself), but if anything this rawness adds something to the characters’ emotional state and to the immediacy of what’s taking place; it certainly doesn’t detract, or prevent Holmes from sending us twenty-five years down memory lane, back to when we first saw Flatliners.

Since its festival run (and before that, a limited pre-release online) Memory Lane has garnered quite some renown as the $300 film. More than that, though, it is an estimable movie in its own right, and the first step – taken without shoes, let alone a shoestring – of a filmmaker who promises to make great strides within the profession. So long as the critical approbation for his debut isn’t dependant in some way upon Holmes electrocuting himself in the future, we’ve much to look forward to.
Posted by Stephen Theaker