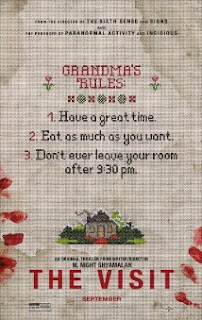 Pop Pop and Nana go gaga as Shyamalan adds another gem to his trove.

Don’t cast teens as protagonists. Stay away from twists. Don’t try to weave in a message. And please, for the love of all things cinematic, do not use the found footage technique. Such is the advice a critic might bestow upon the director of a contemporary horror film.

Despite ignoring each of these presumed precautions in The Visit, M. Night Shyamalan manages to prove his directorial ingenuity once again. The film offers equal parts humour and horror, topped off with Shyamalan’s ever-present moral message. And it’s all steeped in the scenario that this generation’s Hitchcock has mastered: strange things happen to engaging characters in remote and unglamorous locations.

No Cookies and Cocoa
Fifteen-year-old Becca and her peppy younger (by two years) brother Tyler, self-dubbed T-Diamond Stylus, set out to spend a week on their grandparents’ Pennsylvanian farm. Becca, a budding director, wants to film a documentary that explores the longstanding rift between her mom and her grandparents.

The story, unfolding through Becca’s cameras, quickly reveals that “Pop Pop” and “Nana” are a far cry from the cookies and cocoa grandparents that many of us envision . . . especially when the sun sets. Their behaviour grows more erratic and more eccentric. The tight-lipped Pop Pop, prone to bursts of violence, retreats to his shed and makes the most of his incontinence. Nana obsesses over the cleanliness of her oven and engages in a variety of nocturnal oddities. Employees of the local hospital stop by and express concern that the couple has stopped coming to volunteer as counsellors.

By the film’s end, the viewer will get gobs of what Shyamalan does best, such as funny dialogue, the goosebump-inciting twist, and the evocation of contrasting emotions. For instance, sequences in which the siblings debate whether to investigate the strange sounds just outside their door merge humour and tension. The film’s climax, in which both protagonists confront their weaknesses, brings to mind the intensity of that in There Will Be Blood.

From Gen Z to Cra-zy
Films with kids who act beyond their years can be supremely annoying (think Home Alone), yet in The Visit, as with other Shyamalan films, it somehow works. Teens Becca (Olivia DeJonge) and Tyler (Ed Oxenbould) stand as fully developed characters with an innocence and sense of wonder that contrasts with the typical horror film teen so quick to shed clothes and crack open beers. The siblings also represent Generation Z. These are the kids who’ve grown up with the instant access to unlimited information that today’s technology affords. They’re perceptive. They’re intuitive. They’re sensitive.

While Becca is the voice of reason, Tyler is the primary source of humour. His vibrancy, curiosity, and even charisma more than make up for his misogynous (Becca’s word) impromptu rapping that grows a bit tedious. In one of the funniest scenes, Tyler’s bright green jacket rebels against the bleak winter setting as he imitates Nana’s antics.

Though The Visit has many strengths, its true jewel is Nana, who bangs and scratches her way through the film. Chicagoan Deanna Dunagan achieves an unpredictability on par with Heath Ledger’s Joker: one never knows whether Nana will laugh hysterically or burst into tears and start hitting herself. This instability is especially effective during sit-down interviews when Becca attempts to coax from her grandmother details about the falling out with Becca’s mother.

The Revisit
Critics have been unjustifiably harsh with Shyamalan’s films. Consequently, it’s quite possible that with this latest film about the making of a documentary, Shyamalan is, in a sense, revisiting those critical slings and arrows.

Just as Becca seeks an “elixir” that will heal the wounds between her mother and her grandparents, Shyamalan points to an elixir that could bridge the gap between his oeuvre and its attackers. However, is it possible to find such an elixir? More important, can Pop Pop, Nana, and those critics be trusted? ***** Douglas J. Ogurek
Posted by Douglas J. Ogurek