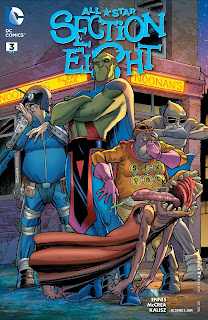 A six-issue spin-off from Hitman (the comic not the game) which was itself a spin-off from The Demon. Tommy Monaghan, the hitman with x-ray vision and a heart of gold, was introduced in the latter during one of DC’s dafter crossovers (invading aliens whose attacks gave some people superpowers). He once tried out for the JLA, but the funniest parts of his comic were usually when he ran into alcoholic Sixpack and his band of hopeless heroes, Section Eight, including characters like the Defenestrator, Dogwelder and the pervert Bueno Excellente. Here, at last, they get their own comic, or at least the survivors do, as Sixpack tries to get the team back together. After adding The Grapplah, the demon bartender Baytor, Powertool, Guts and a new Dogwelder (who found the previous guy’s outfit in a junk shop), he gets up to seven members, and then tries to persuade the stars of the (New 52) DC universe to fill the last slot. The Martian Manhunter, Wonder Woman and Superman all show up; none seem likely to take the bait. It’s funny and gross, Sixpack’s snot, drool and wee depicted in repulsive detail, but also surprisingly moving, by the end reminding me of the classic Doctor Who strip by Scott Gray and Martin Geraghty, “The Land of Happy Endings”. Super-heroes may be dumb, but as Garth Ennis writes here, “As dreams go... Well. I suppose you could do worse.” This mini-series may not mean very much to people who didn’t love The Demon or Hitman, but it’s a must-read for those who did. Stephen Theaker ****
Posted by Stephen Theaker