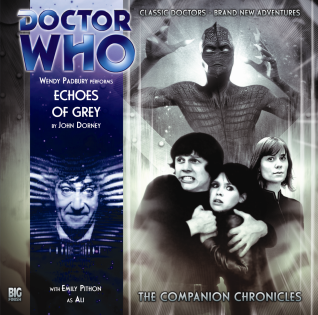 This sixty-seven minute play checks in with Zoe Heriot, now in her fifties after being returned to her own time by the Time Lords. They wiped her memories of her travels with the Doctor, leaving her with just the recollection of his visit to the Wheel in Space to fight the Cybermen, but she has an eidetic memory, and she can tell that there’s a discontinuity in her mind. It has made it difficult to form relationships; she feels like the ghost of herself. Then she meets Ally Monroe, whose life she apparently saved during one of the adventures she can’t remember. Ally thinks her alpha wave gadget will help, and slowly Zoe starts to remember the time she, Jamie and the second Doctor encountered the Achromatics, grey beings who declare their love for you while draining away your life. It’s a second Doctor story in the classic style, of slow-moving monsters in a confined space, with all the creepiness that brings. When they chase the Doctor around a room (he has a plan, but “no other ideas at all!”) it’s easy to imagine how it would have looked on screen. Wendy Padbury is as adept at voicing the Doctor and Jamie as when playing her younger self. The framing device is cleverly done, and by the time it ends the play’s title turns out to be clever too. It’s a good story, though its ramifications are potentially tragic: if Zoe and – as we’ve learned in other stories – Jamie have recovered some of their memories, did the Doctor make a terrible mistake in the Tomb of Rassilon? Stephen Theaker ***
Posted by Stephen Theaker