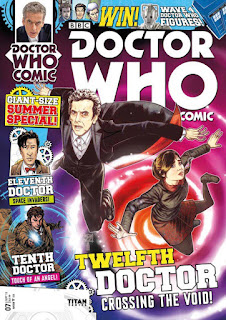 A wonderfully substantial publication that collects four issues of the ongoing US format comics, one each from the twelfth and tenth Doctors’ comics, and two from the eleventh Doctor’s title. In “The Fractures, Part 2”, by Robbie Morrison and Brian Williamson, the twelfth Doctor and Clara are trying to help a UNIT scientist from another dimension. His wife and daughters died in a car crash, and they live on here, but when he crossed the void between dimensions he attracted the attention of the Fractures. Visually it’s not up to the standards of the strips that appear in Doctor Who Magazine, but it’s enjoyable enough. The eleventh Doctor’s story “The Eternal Dogfight” (complete in this issue), by Rob Williams, Al Ewing and Warren Pleece, sees him accompanied by three new companions: a shape-changing alien, a depressed assistant librarian, and a chubby David Bowie type. An everlasting dogfight between two fleets of alien combatants has drifted into Earth’s vicinity, and if the Doctor and friends can’t bring it to an end there could be eight billion civilian casualties. All very entertaining, in thanks part to the intrigue of each new companion’s ongoing story, and the jolly artwork. It reminded me of the early Tom Baker strips in Doctor Who Weekly. The tenth Doctor is also joined by a new companion – Gabby, an American from New York – for his story, “The Weeping Angels of Mons, Part 2”, by Robbie Morrison and Daniel Indro. The statuesque monsters of the title are snatching soldiers from the trenches of World War I. It’s an interesting story, and the artwork (including the colouring by Slamet Mujiono) suits it perfectly, the expressions of the angels being as alarming as one would hope never to see. I liked each individual story, but it’s the cumulative effect of reading almost a hundred pages of new Doctor Who comics that makes it so rewarding. I subscribed before getting even halfway through it. Stephen Theaker ****
Posted by Stephen Theaker