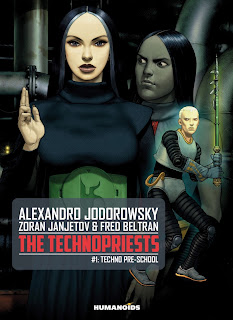 Albino the Supreme Technopriest is on a spaceship with five hundred thousand of his brethren, travelling from one galaxy to another, where they hope to start a new society, where healthy relationships will count for more than scientific advances. It’s the perfect time to kick back and think over his eventful life to date: this first book in the series begins with the horrific events that led to his mother’s pregnancy. Understandably consumed by bitterness, she vows revenge on Ulritch the Red and his fellow pirates. Young Albino is left to feed at the breast of a guanodont, and grows up working in his mother’s cheese factory, with only computer games and little Tinigrifi, a talking (android?) bunny, to keep him sane. Eventually she arranges for him to attend the Technopriest training school of Don Mossimo, where his cleverness attracts the attention of a Techno-Bishop, while she amasses enough money to hire the mercenaries she needs for her revenge. The artwork by Janjotov and the colouring by Beltran are tremendous throughout, detailed and fascinating, only let down by some jarring computer graphics used to illustrate scenes of virtua-walking in cyberspace. This boy lives in a weird world full of peculiar people, not least his own family, and that side of it was good, but there’s an awful lot of sexual violence, right at the heart of the story, and the “Tee hee” from Tinigrifi that follows one event feels misjudged, to say the least. As well as individual digital volumes, the entire series is available in a single hardback omnibus. Stephen Theaker ***
Posted by Stephen Theaker