Doctor Who and the Ark in Space, by Ian Marter (BBC/Audible) | review 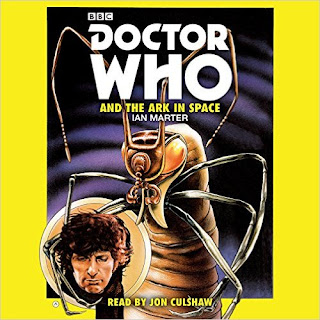 The fourth Doctor, only recently regenerated and accompanied by journalist Sarah Jane Smith and U.N.I.T. medic Harry Sullivan, lands the Tardis on the Nerva Beacon. It seems to be abandoned, but further investigation reveals slimy trails, as if of a giant slug, and then freeze-dried humans, packed away in storage for thousands of years to survive a stellar disaster. The first humans to wake up suspect the Tardis crew of sabotage, a fatal distraction from their true, hidden enemies: the Wirrn, a race of giant locust-like insects with a grudge against humanity, and a gruesome purpose for these survivors. “The Ark in Space” was originally a television story, and this is the Audible version of the Target novelisation from the eighties, written by the actor who played Harry Sullivan. He wasn’t in the Tardis long, sadly, having been cast as the Chestertonian man of action, an entirely redundant position after Tom Baker took the role of the Doctor. It is read by Dead Ringers star Jon Culshaw, who first became famous for his wonderful telephone impersonations of Tom Baker’s Doctor. That ability makes him perfect for this audiobook, though ironically this comes from a time when the fourth Doctor wasn’t particularly funny – for much of this story he’s indistinguishable from his previous, rather serious, incarnation. He narrates in his own reading voice, and keeps the tension high. For a children’s book it is surprisingly gory, with talk of suppurating stumps and smouldering bodies welded to panelling after being repeatedly shot, and in the audio version there’s no bubble wrap to break the spell. Sarah Jane’s long, arduous and essential crawl through a narrow duct is as stressful as ever, no matter how many times we’ve already seen her succeed. The fate of one human infected by the Wirrn bears repetition in full: “with a crack, like a gigantic seedpod bursting, his whole head split open. A fountain of green froth erupted and came sizzling down the radiation suit…” There’s a reason these were my favourites as a child: other books were, quite literally, bloodless in comparison. Stephen Theaker ***
Posted by Stephen Theaker