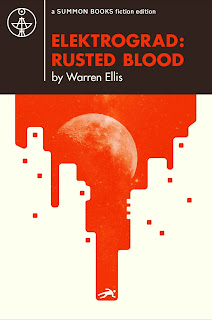 A private eye with a habit of shaking down his clients has been murdered in Mekanoplatz, the northernmost district of Elektrograd, the city of the future, or at least it was, back in the early twentieth century. The idea was that it would be an experimental city, where new forms of architecture and living and work could be tried out. In Mekanoplatz the buildings can walk, reconfiguring themselves to meet new manufacturing needs. They’re in the middle of a change now, though homeless people remain where they are, living in the hollowed-out carcasses of abandoned construction robots. Even a beat this dead has a cop who cares: Detective Inspector Ervin Stross, driving an old car that could explode at any time, trailed by a rookie and an ambitious detective sergeant. Behind the murder lies a mystery, and it’s a mystery that doesn’t want to be uncovered. This is a good novella by a writer better known for his comics like Transmetropolitan and the immensely influential The Authority, but he spins a good story in prose too. This is like a science fiction version of a satisfying episode of Columbo or Luther. Warren Ellis’s original plan was to write a novella in each region – hope he finds time to write them. It would be great to see more of Strauss’s investigations in this fascinating city. Stephen Theaker ***
Posted by Stephen Theaker