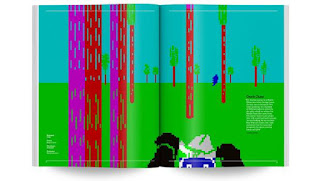 An attractive book that looks back over the lifetime of the immensely successful ZX Spectrum, which came out in 1982 and provoked an astonishing torrent of games. It has 304 pages, all as bright and colourful as the Spectrum itself. The focus is on graphics and artwork, so the interviews are mostly with artists rather than programmers. The text can be a little bit repetitive, the artists all having been asked the same questions, and giving very similar answers – graph paper and colour clash come up a lot. The company profiles are more interesting, but only five are covered: Ultimate, Beyond, Durell, Odin and Vortex. But as shown by the designer not the writer being identified as the author in the copyright notice, this is a book about the pictures, and they are great, lot of double page spreads of games that still look good today. I regret not having properly played games like Heavy on the Magick, Fairlight and Tau Ceti. There are also several nice pieces of painted artwork by the brilliant Crash cover artist Oliver Frey. Sadly, nothing appears from my absolute favourite Spectrum games, the Gollup brothers’ Rebelstar, Chaos and Laser Squad, though there’s a loading screen from their Lords of Chaos. One surprise was seeing games we had at home that none of my friends had ever heard of, like 3D Tanx, Wheelie and Harrier Attack! Another was realising how few of these games we actually bought, an initial C90 and C60 from a work friend of my dad giving me the trading power to build up a massive library of cassette copies. Tut, tut, young me! A third surprise was to see on the copyright page that the Sinclair name and brand is now owned by BSkyB – can’t imagine why they wanted it! Overall, it’s a very expensive book, so not one for casual fans. There are cheaper retro bookazines to be found in WH Smiths. But it’s very lovely to look at, and my money, at least, was well spent on it. Stephen Theaker ***
Posted by Stephen Theaker