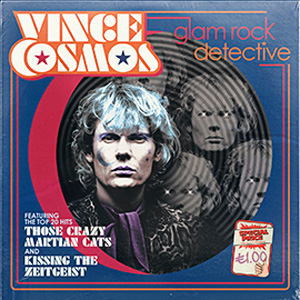 January 1972, and Poppy Munday (played by Lauren Kellegher) moves down to London, where she feels at first like she’s living in a movie. She moves in with a friend, but then struggles to find work, and her favourite pop star is shot while playing live on radio. Things are getting a bit miserable before she gets a frantic call from her mum back home: Poppy has won a competition to attend the launch of Galactic Cinders, the new album by her favourite, Vince Cosmos. He’s a lot like Bowie/Ziggy, full of facets and wearing make-up and feeling the zeitgeist and talking about the cosmic godhead. Weirdly, the creepy, angry little man who lives in the flat above hers is at the launch too. Is he there to assassinate Vince? This two-part story feels like a pilot, in that we’re a long time into the story before we finally get to spend time with Vince himself. I expected to love Julian Rhind-Tutt in this – he was brilliant as a similarly foppish character in the highly underrated sitcom Hippies – but somehow it doesn’t quite work, maybe because it doesn’t feel like he believes the more pretentious Bowie-like utterances of his character. He’s knowing when he should be oblivious. He does a good job with Vince’s songs, though, and by the end I wished that he’d been in it more. I also enjoyed the links to a classic piece of sf literature, and to the Brenda and Effie stories: the ventriloquist’s fuzzy bat out of hell shows up here at a royal variety performance, still in his pomp. Stephen Theaker ***
Posted by Stephen Theaker