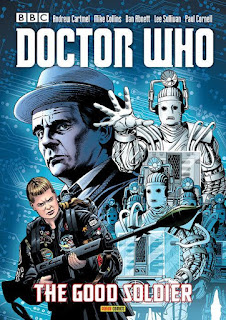 A 128pp collection of strips from Doctor Who Magazine issues 164 to 179, plus a couple from specials, and a pair of text stories. This is the third collection of stories featuring the seventh Doctor, as played by Sylvester McCoy, not the easiest of Doctors to draw, and the twentieth Panini collection overall. As ever with this series of books, the reproduction of the artwork is flawless, as is the overall presentation. Unlike Nemesis of the Daleks, the previous seventh Doctor collection, this doesn’t include any sub-par strips from The Incredible Hulk Presents. It gets off to a great start with “Fellow Travellers”, illustrated by Arthur Ranson. “The Mark of Mandragora”, in which the malevolent and ancient intelligence manipulates the Doctor and the Tardis, has previously been collected in a Marvel graphic novel, but it’s not a patch on the title story, “The Good Soldier”, by Andrew Cartmel and Mike Collins, where the Doctor and Ace encounter the original Mondasian Cybermen on a trip to 1954 Nevada. In its look and feel it points towards how consistently ambitious the strip would become during the eighth Doctor’s tenure. The commentary section is as fascinating as ever. My very favourite panel of the book makes the writer of that story cringe! And did you know that Andrew Cartmel approached Alan Moore to write for the television programme? Stephen Theaker ***
Posted by Stephen Theaker