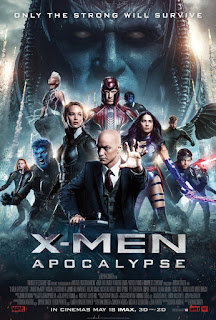 Prepare for what might be the most entertaining action scene that you’ve ever experienced.

I thought that these X-Men movies would start running out of gas, but they haven’t… and I don’t want them to. X-Men: Apocalypse, the latest installment in the longstanding series, keeps it moving full speed ahead. Director Bryan Singer serves up his fifth X-Men work with all the ingredients of a great action/adventure: humour, loss, vengeance, spectacular visuals, great music (ranging from Beethoven to Metallica), extreme character change, and of course, violence. Plus we find out how Ororo Munroe/Storm got white hair and how Professor Charles Xavier lost his hair. Bam!

And yes, the film rather blatantly jumps on the apocalypse bandwagon, but so what? If people like the prospect of a destroyed Earth, then give them that.

In an alternate 1983, En Sabah Nur/Apocalypse, the world’s first mutant, awakens in Cairo after a 5,500-year nap. The supervillain recruits four susceptible mutants (just like four horsemen, eh?), then sets out to conquer the world. A larger group of mutants, headed by younger versions of the ever peaceful Charles Xavier and the pre-antihuman Raven/Mystique, wants to stop them.

There are many fun tidbits sprinkled throughout the film. Following are a few examples:


Acting ranges from satisfactory to great. It reaches its peak with Michael Fassbender’s Erik Lehnsherr/Magneto. Since the havoc he wreaked in X-Men: Days of Future Past (2014), Erik has retreated to a Polish village, started a family, and become a dependable blue collar worker. However, tragedy must strike to put this metal manipulator on the path to villainy. It’s difficult for an actor to convincingly convey grief in a superhero film, but Fassbender pulls it off.

Oscar Isaac delivers an enjoyably over-the-top bad guy in En Sabah Nur/Apocalypse (aren’t the most ridiculous villains often the most entertaining?). He kills people by merging them into walls or the ground. His vocals shift between a whisper and a multi-voice roar: “Everything they’ve built will fall! And from the ashes of their world, we’ll build a better one!”

A Speedster and a Maniac
Even for those who think it’s time to put a big X over this franchise, it would be downright inhuman not to enjoy the two best scenes, which are really only peripherally connected to the plot. The first begins when the film speed slows, the camera focuses on a bee, and synthesizers kick off the Eurythmics’ eighties classic “Sweet Dreams”. Then the super-fast Peter Maximoff/Quicksilver (Evan Peters) steps into the scene. Prepare to laugh out loud and be awed as Peter attempts to save other mutants from an exploding building. Because it’s from his perspective, everything around him appears in slow motion. Watch him backtrack to save an airbound fish, then grimace as two youngsters lean in for a sloppy kiss. If you saw Peter’s talents displayed in a similar scene in X-Men: Days of Future Past, then you’re in for a treat: this one takes it to the next level. At the film’s end, the woman next to me said, “That was the best action scene I’ve ever seen.”

The second standout scene could be interpreted as a cameo trick to boost box office sales, but doesn’t everyone love a good trick? In it, a shirtless Wolverine goes on a rage-induced killing spree during which he uses his new adamantium claws to slice and impale his way through 40 or 50 men before running out into the snow. No talking. No magic. Just growling and slashing and killing. Raw power. As Wolverine retreats, a stunned Scott Summers/Cyclops can only say, “Hope that’s the last we’ve seen of that guy.”

In the Moment
Certainly there are things that the fussy moviegoer can pick apart. That’s partly because there’s so much chronological shifting in the X-Men series. So questions emerge: Shouldn’t character A and character B be closer in age? Didn’t character C first meet character D much later?

Moreover, the underdeveloped Raven/Mystique character didn’t require an actress of Jennifer Lawrence’s calibre, and the “adult” Mystique of earlier installments was more “mystiquey”.

Then there are the typical critic jabs (e.g. “tired”, “unimaginative”) that seem to come with any long-lasting series. Maybe they stepped out to sharpen their critical spears during the scenes with Quicksilver and Wolverine.