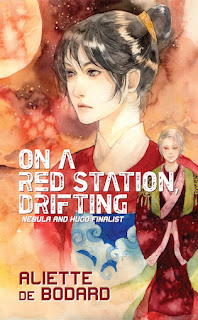 The Great Virtue Emperor is losing control of the star-spanning Dai Viet Empire. Rebels like Lord Soi are tearing it apart. Linh, the highly educated magistrate of the Twenty-Third Planet, was induced to flee before it fell to the war-kites of the rebel lords. The shame of that flight is bad enough, but she also sent a strongly-worded report on the civil war to the Emperor, which some might see as treasonous in its questioning of his leadership abilities. Le Thi Quyen is the administrator of Prosper Station, working with the Mind – the Honoured Ancestress – who controls its every function. As well as the arrival of Linh and all the danger that brings, she must investigate the apparent malfunctioning of the Honoured Ancestress and the betrayal of her own brother, Huu Hieu, who sold off the memory chips containing the thoughts of their revered ancestors. The station’s Mind helps its inhabitants to cope with the unnaturality of life in space, sharing their thoughts and cloaking the metal and rivets with poetry and decoration, but as she loses her strength, the comfort and connection she provides ebbs away, putting the lives of everyone on the station in the hands of Linh and Quyen, and at the mercy of their quarrel. This novella is imaginative and intense, each character stretched to their breaking point, many spouses missing in the war, now struggling to cope with current crises while knowing that worse is to come, fighting their own worst impulses when the wrong word at the wrong time could be fatal. Stephen Theaker ****
Posted by Stephen Theaker