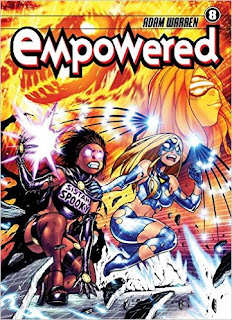 Sistah Spooky is still devastated by the loss of her lover, and it’s made all the worse by her having kept their relationship secret during their time together. Emp is feeling terrible about it too, wondering if she could have done something different on the Superhomeys’ space station D10. So the two of them do something really stupid that involves using forbidden alien weaponry (forbidden because six years ago it created a new volcano in San Antonio) to batter at the gates of hell. We’ll learn lots more about Sistah Spooky and even a bit about Emp’s unfortunate tendency to get tied up by supervillains. This book keeps up the high standards of the series. From an unpromising beginning Emp has grown into one of the bravest, most admirable and most determined superheroes in comics. I may have only bought the whole series because it was on sale at Dark Horse Digital (it was Father’s Day and I deserved a treat!), but it’s now a solid favourite of mine. The stories take a while to bloom, but when they do you care because the roots go so deep. Stephen Theaker ****
Posted by Stephen Theaker