Everyone can now suggest items for the British Fantasy Awards 2018

Having totally forgotten last month to put forward any items for the British Science Fiction Association awards, I was ready to go when rival organisation the British Fantasy Society opened the door yesterday to suggestions for its own awards, my very favourite awards, the British Fantasy Awards. I spent a good long time last night converting last year's ebook purchases to rtfs so that I could check the word count and put the books in the right category. As I said on Twitter, that's my idea of a party!

If you want to suggest items yourself, the form is here.

And for easy reference, here's a table with the items sorted into alphabetical order.

It is well worth submitting your work published in 2017, and other work you found interesting. In previous years the suggestions list has had a big effect on voting (increasing it, and focusing it), and it has an effect later on too, with BFA juries often looking at the suggestions list for ideas in the course of deciding whether to add two extra items (known as egregious omissions) to the shortlist.

Like it says on the suggestions form, it "doesn't matter if you're a member or convention goer, or if it's your own work, or anything like that – the idea is to produce a useful, comprehensive eligibility list".  I had added dozens of items to the list before remembering to add the most important of all…! 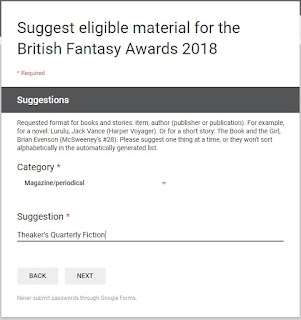 Don't be embarrassed to add your own stuff – it's part of the reason the eligibility list was created in the first place, and it's generally a big help to the awards admin.

For one thing, as a writer you can easily look up the proper word counts of your work, so you know whether to put a piece in short stories (0 to 14,999), novellas (15K to 39,999) or novels (over 40K). You don't want to miss out on a nomination because your readers have voted for it in the wrong category. And you don't want to miss out on an award because your novel was voted onto the horror shortlist when despite the spooky cover it's really much more fantasy.

What's more, you'll also provide the correct title, spell your own name properly, be able to provide the publisher, and know whether it was first published in 2017 or not.

Following a vote at the 2017 BFS AGM, these already expansive and generous awards have added a new category: audio. This has been defined in the awards constitution very widely, which I think is brilliant:

"An audio work performed by one or more participants and published for the first time in the English language in any part of the world in any audio format during the relevant year."


So that would include fantasy-related podcasts, radio programmes, audiobooks, music, audio plays and even, one imagines, Alexa skills (anyone really, really into Ambient Sounds: Space Deck?), if first published during 2017. I think it's great that so many additional types of fantasy have been brought into the purview of the BFAs, and I think it could be an absolutely fascinating category.

Updated 5/1/18: Oddly, it looks like the awards constitution was rewritten today to provide different eligibility requirements (new bits in bold):

"A spoken word audio work (e.g. audio book, radio drama, podcast) performed by one or more participants and published for the first time in the English language in any part of the world in any audio format during the relevant year."

Presumably what happened was that someone saw music being added to the awards suggestions list and didn't like it, and so the constitution was rewritten to render music ineligible. This is rather strange, since the BFA constitution explicitly says it cannot be changed except by a vote of the AGM, and a "committee vote may not be used to reverse a decision of the AGM".

Maybe this is seen as a correction, i.e. that the original wording didn't reflect the proposal that was made. Unfortunately, members of the society weren't told about the original proposal beforehand, and haven't been provided with the text of it, and haven't seen minutes of the meeting either, so we don't know. If the AGM voted on a proposal that contained the first wording, that's what should be in the constitution.

Either way, this is why it's a good idea for people making an awards proposal to set out exactly the words they wish to appear in the revised document, and to tell members about the planned change in advance, so that they can discuss the ramifications in more depth than is possible when a surprise proposal is dropped on an AGM with a relatively small number of attendees.

Similarly, this is why it's a good idea, as soon as possible after an AGM, for the minutes to be released, and for the awards administrator to explain to members what changes have happened, and how they will be implemented in the awards constitution, so that any issues can be worked out before the new constitution goes live and the ball gets rolling on the next awards cycle.

It's also why we previously had the rule (bafflingly removed at the 2016 AGM after a proposal from the society's chair) that awards proposals should be supplied in writing to the awards administrator before the AGM, so that the awards administrator could ensure everything was ship-shape and explain to the proposer what the likely and often unexpected consequences of their proposal would be.

Anyway, what a shame to narrow the category so much. It's hard to see what is gained from excluding music from the awards (except I suppose to make it more likely that the eventual winner will be in the room at the awards ceremony). And what a blinking waste of my time it was looking for suitable items to add to the list in that category!
Posted by Stephen Theaker